Four massive servings of veggie-rific deliciousness. Cheesy, filling, beautiful -- this recipe has it goin' on!

Place whole squash in the microwave and cook for 3 - 4 minutes, until soft enough to cut.

Once cool enough to handle, cut squash in half lengthwise. Scoop out and discard the seeds.

To a very large baking pan (or 2 medium baking pans), add 1/2 inch of water. Place squash halves in the pan(s), cut sides down.

Bake in the oven until the insides of squash halves are tender, about 40 minutes.

Remove pans(s) but leave oven on. Once cool enough to handle, remove squash halves from the pan; place on a dry surface with the cut sides up. Set pan(s) aside.

Scrape all of the spaghetti squash strands out with a fork and transfer to an extra-large bowl. Set aside the bowl as well as the hollow squash halves. Empty water from pan(s). Return squash halves to the pan(s), hollow sides up.

Return pan(s) to the oven and bake until filling is hot and mozzarella cheese has melted, 15 - 20 minutes.

Once cool enough to handle, evenly cut each of the stuffed squash halves in half, leaving you with 4 large pieces. Serve up and enjoy! (Pssst... Don't eat the skin.)

HG FYI: The recipe method of calculating PointsPlus® values counts the carbs, protein, etc., from vegetables -- even those with a value of 0*. If calculated without 0-value veggies, this recipe has a PointsPlus® value of 4* per serving. 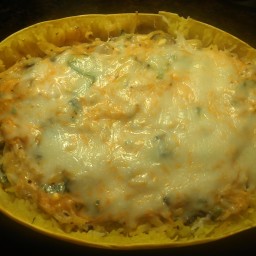 Erincpeters
I agree that the recipe is a tad overcomplicated but the result is tasty! I used cream cheese instead of swiss, and didn't have mushrooms. We really enjoyed and will make again, probably adding garlic and onions forst.
7y
Reply
Reply

ladijas
Good recipe. Directions are bit over complicated. Squash can be cooked whole in the oven. Prick reapeatedly with a fork and bake in a pan with enough water to cover the bottom. I couldnt find the creamy tomatoe soup. So I used a regular can of tomatoe soup and a carton o f heavy cream.
9y
Reply
Reply