Naan( Indian flat bread) is traditionally cooked in Tandoor grill. But for ease of cooking naan at home, here is recipe on how to cook the butter naan on Tava/ griddle.

In a bowl add yeast and sugar to warm milk.

Mix well, cover the bowl and set aside to rest until the yeast in milk ferments and becomes frothy. In a large bowl add flour, salt, yogurt and fermented milk.

Mix the dough and knead dough well for 7 mins until dough becomes soft.

Cover the dough in the bowl with damp cloth and set aside for atleast 4 hours or until the dough to double in size.

Once naan dough doubles in size divide the dough into equal sized balls.

Heat a tava/griddle, when hot place one rolled naan dough on tawa.

Cook naan on both sides for 30 seconds on each side.

Light another gas burner, with help of metal thong( one used to cook papad) immediately transfer the half cooked naan to direct gas flame and cook on naan on both sides until brown spots appear on naan( as we cook pulka). 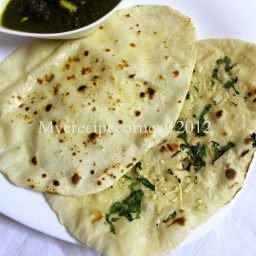 sduncan44
I added in another 4 Tbls of yogurt and another 1/2 cup of milk. I think there may have been a mistype as there's no way this worked without the additional liquid. Plenty tasty, though, ultimately. Thanks for the head start!
4y
Reply
Reply