Absolutely delicious meal to make, but be prepared to take a while to make it. Long preparation time, but well worth the effort. Everyone who has a sweet tooth will love these and want more as soon as it runs out.

Gomb?c ("GUM-BOHTS") is a sweet dish eaten by Hungarians as dessert after a meal or as main course after soup. It is a dumpling made from potato, flour and eggs, filled with a whole plum, a piece of apricot, other fruit or jam. Other varieties include t?r?gomb?c, in which potato is replaced with t?r? in the dough.

Pre-heat a deep saucepan on the stove with salted water, bring to the boil so its ready for dumpling to be place into the water. The deeper the water, the more dumpling you can cook at once.

Knead into a soft dough. Put onto a pre-floured pastry board and roll out to thickness of your finger.

Cut into palm sized squares using a knife or cookie cutter. Put in any flavoured jam or fruit as desired into the middle of each square. Don''t overfill or you will have trouble closing the squares up. Pinch together the dough on top, and roll up the squares into balls. This can sometimes be difficult if you have too much jam inside, so be sure to seal up the jam ball as much as possible otherwise it will burst in the boiling water and lose its contents.

Put the dumplings into boiling water. Once they are fulling cooked they will rise to the surface of the water. Be sure to stir the saucepan a little to avoid the dumplings sticking to the bottom of the saucepan.

Set aside each cooked dumpling. Once all dumplings are cooked, you can toss them in toasted breadcrumbs. You may either pre-toast the breadcrumbs or toss the warm dumplings into a slow cooking saucepan with breadcrumbs.

You may also wish to cut finger shaped noodles with the dough mixture to go with the dumplings and just cook the same was as the dumplings in the water and then toss with toasted breadcrumbs. Tip: Toasting alot of breadcrumbs can be quite messy, so make sure you have a large clear area to cook this.

- 4 cups or more of Breadcrumbs

- 4 tablespoons of Butter or Margarine

Put some margarine in a saucepan , let it melt then put in some breadcrumbs and keep tossing and stiring until it is well toasted. Put into a large baking dish to coat dumplings and noodles previous created.

You can use whole plums, apricot pieces or any other fruit or jam spread inside of the dumplings. 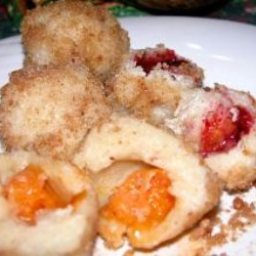 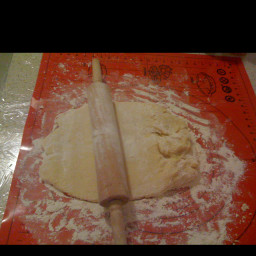 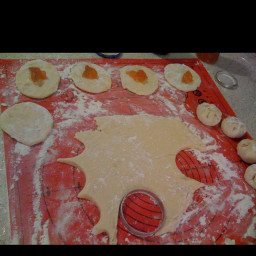 Preparation: making the dough for dumpings, putting jam in them then making them. 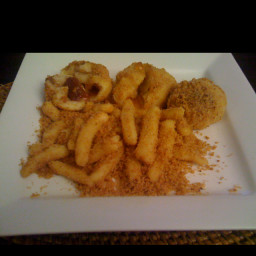 Oldwestcook
Excellent! Recipe has perfected the ingredient amounts which is very important for this dish. Try it! I put in cherries and plums.
9y
Reply
Reply

keepsmilyn
You can use whole plums, apricot pieces or any other fruit or jam spread inside of the dumplings. [I posted this recipe.]
13y
Reply
Reply