Kids really enjoy making something On-Their-Own. By packaging pre-measured ingredients and providing simplified instructions you can help them experience the joy of eating something they created in the kitchen.

This isn't a specific recipe. It's a description of a method and ideas to get you started.

Divide the ingredients of your recipe into logical groups: Dry, wet (packaged), wet (fresh), and garnishes.

Measure all appropriate dry ingredients into a zip-top bag and lable it DRY. You can also use numbers or colors to designate the contents if that suits your purpose. If you have pre-packaged wet ingredients (such as a 1/2 cup container of applesauce, sealed container of oil, small carton of raisins or dried fruit, etc.) label them clearly also. Similarly prepare small cards with any presh ingredients depicted in a simple or graphic form. We included card with a picture of an egg being cracked into a bowl, oil and two teaspoons, and milk being poured into a cup. We found a measuring cup with very clear simple markings for 1/4, 1/2. 3/4, and 1 cup. We then added blue, red, yelow, and green lines with an indelible marker to make thisgs even clearer. i.e. Pour milk to the RED line that says 1/2.

A brown sugar and nut topping mixture was also placed in a separate bag and labeled clearly as well.

All of this was packaged in paper bag along with disposable foil muffin tins with pre-placed muffin papers. We found those in the bakeware section of the grocery store

Then we created 1/2 page instructions with large colored numbers down the side. Using simple graphics we showed a bag with DRY and a big (1) being poured into a large bowl. A smaller bowl showed a box of raisins (2) and container of applesauce (3) being dumped in. The same bowl showed a bag of bran flakes (4) being dumped in and a wooden spoon indicated to stir. Most of these pictures were found as on-line clipart so they were simple to create. We used a few words here and there to guide or clarify instructions.

The next set repeated the egg, milk, and oil graphics into a different color bowl and the spoon indicated to stir.

Finally we showed the small bowls being added to the large bowl and being stirred again.

A graphic of a parent helping flagged instructions for setting the oven, placing the pan in and out of the oven to remind the child allow assistance with these functions. Baking times were reinforced by graphics of a clock face with the appropriate number of minutes shaded.

We made up four such kits in a box as a Christmas present. Along with her own spoon and measuring cup, Granddaughter is well on her way to learning the joys of creating in the kitchen.

Our four-year-old granddaughter very proudly took a pan of raisin-bran muffins with crunchy topping to a young friend's home to share. She was just as proud as punch that she had baked them ALL-BY-HERSELF. HerMom and Dad took pictures while helping and shared them with us. We are calling it a success. 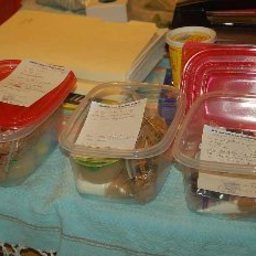 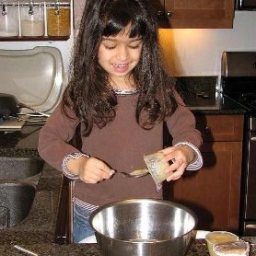 JCSM-Mom
I have my kids cook with me often. They help measure, crack eggs, stir etc. This idea is a good one. I will have to try it with my kids soon.
10y
Reply
Reply

sgrishka
This is a great concept and method for getting the young ones involved in the kitchen. There's nothing quite like the excitement and enthusiasm that just flows from a child inspired by a sense of accomplishment in the kitchen. Cooking provides children a means to express creativity, helps to increase their confidence and self-reliance, and allows for some quality family time... Children who learn to cook at an early age develop basic skills that last a lifetime.
14y
Reply
Reply

promfh
Our four-year-old granddaughter very proudly took a pan of raisin-bran muffins with crunchy topping to a young friend's home to share. She was just as proud as punch that she had baked them ALL-BY-HERSELF. Her Mom and Dad took pictures while helping and shared them with us. We are calling it a success. [I posted this recipe.]
14y
Reply
Reply