This recipe of October 24, 2010 was created when Mama Laughton went to teach her dressage students, groom Springer for the photo shoot, and perhaps even ride! It was a very wet fall day and so Papa Laughton stayed home cook. This recipe is based on the fundamentals of “Tuna Casserole”, elevated to this classic riding/football dish! Bake during the 2nd half of the Mama’s Sunday NFL game.

Unfortunately, it was too early in the day for a glass of wine, so only a small quantity of the fine nectar was used in this recipe. More will be used during the baking and eating sequences.

1 can of Campbell’s Mushroom soup (you could substitute for any cream soup – but I did not want to press my luck on the first attempt). DO NOT add the water or milk to the soup goop!

DO NOT throw out the boiled water from the pasta, strain pasta so water stays in future casserole dish you found in cupboard somewhere. Pour this water back into the same pot to boil the carrots and celery.

Use your pots more than once – you have to do your own dishes – so the pasta and vegetables are boiled at different times in the same pot. The same applies to the frying pan, wipe it out after the sauce is made and use it to fry the Triscuits. Once done, wash your dishes and put them away – gets you bonus points!

Boiled as per instructions on bag, el dente for 8 minutes. When done, strain and drizzle with olive oil and set aside. See note about saving the boiled pasta water.

In prior life it had been “Shake & Beak” chicken breast. Let stand in refrigerator until you know you have to cook it soon or throw it out. I think other meat could be used – fish or pork for sure. Even canned meat, if no leftovers.

Melt dab of butter in frying pan and toss in the thinly slice fresh mushrooms. Once they start to soften, add red wine and Worcestershire sauce and cover. Simmer on low about 5 minutes or while you go do something else. Add 10 “grinds” of fresh pepper and salt (to taste).

Using the pasta water you saved, since it is already nearly boiling, boil the thinly sliced mixture of carrots and celery for 10 minutes (that seemed enough). Don’t add salt as it was already in the water. When they are done, strain them (you already have one out so might as well use it), then put the carrots and celery in with the mushrooms.

Real simple, empty the can of condensed mushroom soup into the frying pan with the mushrooms. Fold the soup goop into the vegetable mix and let it simmer in the same covered sauce pan until it warms through and softens.

Put the 10 Triscuit Crackers between a folded piece of waxed paper and crush them with a rolling pin. I checked and 10 crackers makes ½ cup. Wipe out your frying pan and put it back on the stove with the new dab of butter. When it is melted, stir in the Triscuits and fry on low about 5 minutes. Measure out the grated cheese and then pour the Triscuit mix into the measuring cup and gently stir the mixture together. (this is a fine snack to eat on its” own!)

Put the strained pasta back in the pot and then scoop in the vegetable and sauce mixture from the frying pan, folding slowly so as not to destroy the pasta. Once mixed, scoop the mixture into the casserole dish (lightly spray with Pam) and flatten the top so it looks neat. Use a teaspoon to sprinkle the topping onto the mixture so that it is completely covered. Sprinkle top with Paprika so it looks pretty. Put the casserole cover on the mixture and put it in the fridge until it is time to bake for dinner. Bake in pre-heated oven (450 F) until the top browns, or the mixture ignites.

Follow these instructions and you have a perfect meal with a minimal amount of mess. 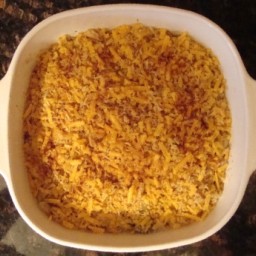