this recipe comes straight from Chili's

Marinate for as close to 8 hours as possible.

Bake, Broil, Grill or Skillet Fry, either way works well. Chili's grills (and I prefer grilled). Choose your preferred method and cook until the breasts are done.

While the breasts are cooking, fry up the bacon until CRISP!

When the chicken is done, top each breast with 2 tbsps of BBQ sauce, two strips of bacon and 1/4 cup of shredded cheese.

Broil until the cheese is melted. 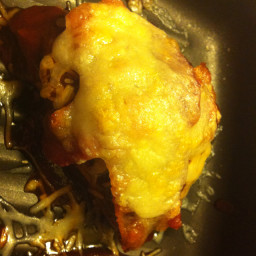