Cut up one of the chickens and place it tightly in a 13x9 Pyrex dish. Melt 2 teaspoons margine and brush on the skin of the chicken pieces. Liberally coat the chicken with the paprika/sugar/salt mixture from above. Pour in 2 cups of water in the dish and place in the oven for one and 1/2 hours or until done by meat thermometer.

Allow chicken to cool enough to handle. Strip skin and bones from chicken and toss out. Place meat in refrigerator while proceeding. Save the drippings to be added below.

In a large stock pot put the remaining tablespoon of margarine and the cup of chopped celery and onions. Sauté the mixture until the onions are soft. Add the drippings, the white and black pepper, onion powder, garlic powder poultry seasoning ( add extra Sage if you like). Mix well. Add water until the pot is 3/4 full. Heat to boil.

Cut up the other whole chicken. Add to the boiling broth and simmer for 45 minutes.

Strain the chicken out of the broth. And allow to cool before striping meat from the skin and bones. Discard bones and skin. Cut meat to chunks and add to bowl of the first chickens meat in refrigerator. Replace in refrigerator.

In a large bowl mix the cup of self rising flour with the all purpose flour. And a dash of salt and mix well. With clean or gloved hands, mix the lard in to the flour until well mixed. Now, slowly add ice cold water until you can form a dough ball. Turn dough out on a floured surface and roll flat to about 1/4 inch flat. Dust the top with more flour and then use a pizza cutter to cut the dough in roughly 1x1 squares or larger if you like.

Bring broth back to a boil and slowly add the squares to the both so they don't stick together. The bisquets will float to the top, cook for 30 minutes or until the bisquets sink. If the soup is not very think add more flour mixed in to thicken. Now finally add your bowl of chicken from the refrigerator. Cook for 15 minutes stirring occasionally and serve! 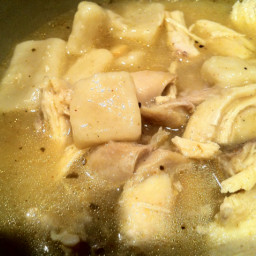 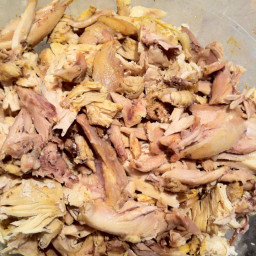 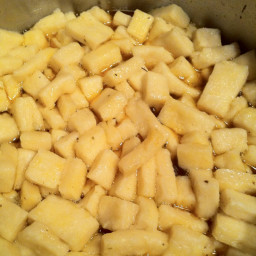 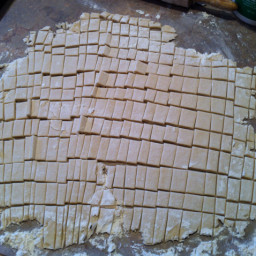 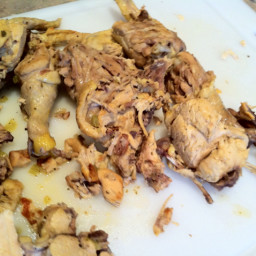 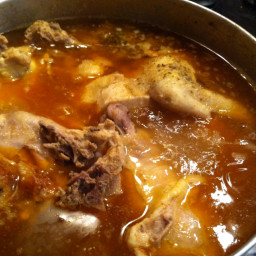 zalerfamily
This recipe turned out very good and I can't wait to make it again. The whole family loves it
6y
Reply
Reply