Pork With Brie And Pecan Molasses

Try this Pork With Brie And Pecan Molasses recipe, or contribute your own.

4. Reduce heat to low; cook 5-7 minutes or until slightly thickened. Remove pan from heat; whisk in butter. Place watercress on serving platter; slice pork and place on watercress. Top with sauce and serve. 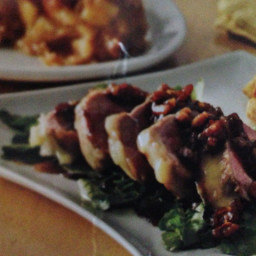 BoyceGirl
I got the recipe at Publix. It is delicious and easy to make. I never have any leftover. Making it tonight.
8y
Reply
Reply