Same recipe may be used and cooked in two different ways.

Mix ingredients together and set aside.

To assemble pot stickers or dumplings

1. Cook meat in pan until almost done. Do not brown or crisp. Add spinach and seasoning ingredients. Mix well.

2. Put one tablespoon filling in the center of the wrapper. Wet edges with water all round. Fold it into a crescent shape by pleating the outer edge of the dumpling. Press the edges together firmly with a fork. Alternatively, use a dumpling press. Place the won ton wrapper into the mold; add the filling; fold the wonton wrapper over and press the mold to crimp and trim the edges.

3. Place formed pot stickers on wax paper on a cookie sheet and cover with a damp towel. This will keep all the pot stickers moist until the last one is made.

To cook as pot stickers:

1. Add 1 tablespoon oil in a 12 inch skillet over medium heat. A non-stick pan or good stainless steel pan work well. Arrange half of dumplings in the skillet. Turn heat to high. Cook uncovered for one to two minutes or until brown on the bottom. If desired, turn over and brown on the other side also.

2. Add cup chicken broth. Reduce heat to medium. Cover tightly and cook for 5 minutes or until all the liquid is absorbed.

3. Transfer dumplings, brown side up, to a plate. Repeat cooking with other half of pot stickers. Serve pot stickers with dipping sauce.

To cook as steamed dumplings:

1. In a Chinese steamer, bring 1 quart of water to a boil over high heat. Scatter the Chinese cabbage shreds on the tiers of steamer. Place dumplings on the cabbage.

2. Brush or spray each dumpling with chicken broth generously. Then put the tiers over boiling water. Cover and steam for 5 to 7 minutes.

Notes: ground pork purchased in the grocery store is often high fat and full of 12% or more salts and juices. It is not a pure meat. We found a pork loin on sale, trimmed what little fat there was on it, and ground it with our meat grinder. Voila! Pure lean ground pork. Although the original recipe does not call for the meat to be pre-cooked, we cooked the filling ahead of time.

We prefer using low sodium soy sauce. Dumpling wrappers used were won ton squares. Original recipe calls for browning the pot stickers on one side only, then pouring the chicken broth into the pan. We like the pot stickers a little crispy all over and choose to brown them on both sides.

Chicken broth may be home made or use the low sodium, low fat canned broth.

For the dipping sauce, original recipe calls for Szechwan chili sauce, but we commonly keep chili garlic sauce on hand and used it instead.

Each (1 oz.) dumpling (dipped in sauce) contains an estimated:

These are always a hit at office parties or other gatherings. They also freeze nicely prior to the final cooking stage. Make a whole bunch and freeze in packages for later cooking. 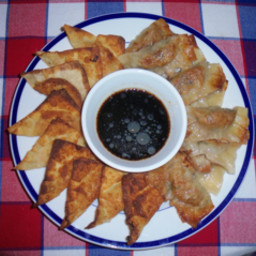 Pot stickers are the right. I would recommend just frying them instead of adding the broth to finish, it caused them to be soggy. Great flavor though. 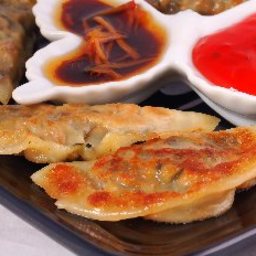 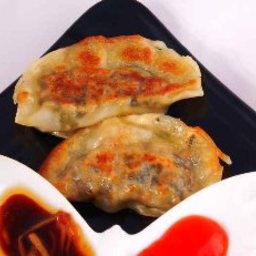 Natternut
Great dumplings. We make them all the time.
9y
Reply
Reply

ellepipes
This does not say how to MAKE the dumplings.
11y
Reply
Reply

SeattleMom63
Next time I would spice up the meat mixture some more. Choosing the correct wrap very important for pan browning.
12y
Reply
Reply