Smoked turkey sausage, Rotel, pasta and half and half. Delicious one pot meal. Adapted from America's Test Kitchen.

2. Stir in broth, tomatoes, half and half, penne, 1/2 tsp salt and 1/2 tsp pepper (more or less to taste) and bring to a boil. Cover skillet and reduce heat. Simmer, stirring frequently, until pasta is tender, about 15 minutes.

3. Off heat, uncover skillet and stir in 1/2 cup cheese. Top with remaining cheese and broil until cheese is melted and spotty brown, about 3 minutes. Sprinkle with scallions before serving.

To make healthier, omit all but 1/2 cup cheese, added to top and broiled.

Use milk instead of cream to lighten. 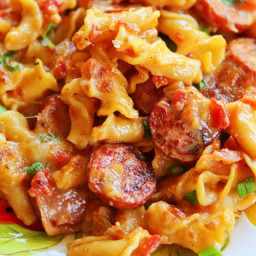 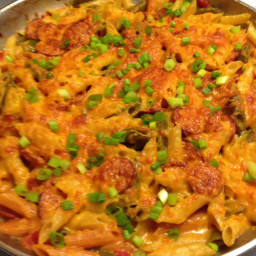 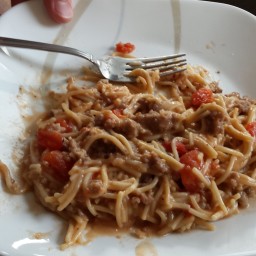 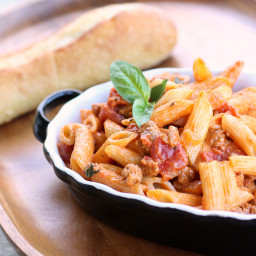 sneha_900
You cook so well, I really like your style. Upload this video on Khal website; you'll get lots of attention on that site.
2m
Reply
Reply

jbooshey
I used Johnsonville Smoker Turkey Sausage and Rotel Tomatoes with Chipotle and Green Chiles. It had some kick to it, but it was a pleasant, warming spice. Let the skillet cool a little so the sauce thickens up and it becomes a really good, different pasta dish. I loved being able to cook it all in one dish.
2y
Reply
Reply

jessicanelson7
So good and easy I loved it
3y
Reply
Reply

smartwon
It was good. Have forgotten to retry it, so that tells me it didn't make too much of an impact on our daily routine.
4y
Reply
Reply

janclark4
I know we'll love this just by looking at the ingredients.
4y
Reply
Reply

bayarchimeg_tsogtbayar
It was a good pasta but a bit spicy. Not fit for kids. Next time I'll use regular canned tomatoes.
4y
Reply
Reply

gregkubasek
Easy to make and tastes great. This has been added to our meal rotation!
5y
Reply
Reply