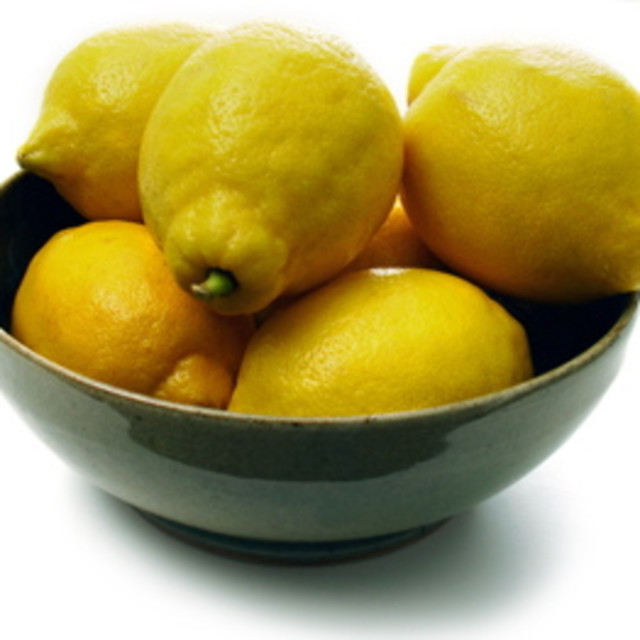 The lemon is a citrus fruit known for its tangy acidity. Tree-ripened lemons are especially sweet, and thus many of the lemons available to us in supermarkets have been picked green and ripened artificially to allow for more acidity.

This cultivated hybrid has origins in the wild mandarin and citron fruits and has been a presence in various cultures for thousands of years.  Though the location of the first lemon-cultivation is uncertain, it seems that lemons first became common in the Mediterranean area.

Lemons served some interesting purposes after making their European debut in the 11th century. Their biting juice reddened the lips of the women of Louis XIV’s court, and lemon juice is in fact still employed as an ingredient in some lip glosses. Additionally, lemons were used (along with limes) by sailors, including those of the British Royal navy, to combat scurvy with their high vitamin C content.

Meyer lemons, once constricted to people’s home garden lemon trees, have also recently found a commercial market. Though tart and juicy, Meyers are much sweeter than the Eureka and Lisbon lemons, and they are available in early spring at specialty markets.

When selecting lemons, aim to find the prettiest: the ones you might want to pile in a ceramic bowl and display on your countertop like art. These bright yellow, smooth-skinned, glossy fruits are most likely to be juicy and ideally ripened.

The pickier lemon-chooser should look for heavy fruits that are very firm, but slightly tender. A too-hard lemon may mean one that is old and a bit shriveled on the inside, and a coarser lemon skin may indicate a less-juicy fruit.

Lemons will be fine for a week or two at room temperature, but they last longer in the refrigerator—up to six weeks when kept ziplocked in the fridge “crisper.” Lemon zest can be frozen, as can lemon juice (try putting the juice into an ice-cube tray and then bagging the cubes to keep in the freezer).

Lemon juice, pulp and rind (“zest”) each play instrumental roles in cooking and mixing, and the fruit’s bold, bright yellow is also valued for its ability to visually spice up food and drink.

When using lemons for both their juice and their zest, zest the lemon prior to juicing.