This recipe was given to me by my high school French teacher, Ms. Dodsworth. I still make it every Yule.

In a large mixing bowl, beat egg whites with a mixer on high speed. Beat to soft peaks. Gradually beat in 1/2 cup of powdered sugar. Beat to stiff peaks. Set aside.

In a small mixing bowl beat egg yolks on low speed until thick. Beat in 1/2 cup of powdered sugar and the 3 Tbsp cocoa at high speed. Fold egg yolk mixture into egg white. Spread in pan. Bake for 15 minutes or until top of cake springs back when touched.

Invert cake onto powdered sugar coated towel and carefully remove wax paper. Starting at the narrow end, roll towel and cake up. Place seam side down on a wire rack to cool.

Beat all filling ingredients together. Unroll cooled cake. Spread filling on it and re-roll without ths towel.

Ice the cake with the chocolate frosting and decorate.

Some notes on finishing:

The spearmint candies are often too thick, so I slice them in half - retaining the more decorative side for the cake. The spearmint leaves together with the cinnamon candies look like holly and holly berries. Other decorative elements can be used; use your imagination! 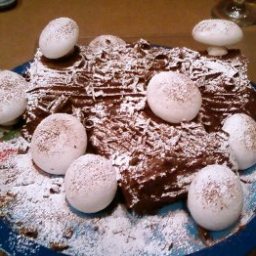