Try this Butternut Squash Soup recipe, or contribute your own.

2. Add onion and garlic and cook gently until fragrant and wilted.

3. Add sweet potato, squash, and stock and bring to boil. Reduce heat and simmer for 30 minutes, or until vegetables are very tender. Remove bacon, if using, and discard.

4. Puree soup and return to heat. Add more stock or water if soup is too thick. Season with salt and pepper to taste.

5. Serve soup in bowls. If desired, cut a small handful of chives into long pieces and scatter over soup to garnish.

NOTES : Alternative garnishes could include yogurt cheese, crushed baked tortilla chips or pita chips, a small amount of grated cheese, fresh herbs, roasted garlic cloves, or croutons. The soup instructions include the strip of bacon, but I use the suggested alternative of 2 tsp./10 ml olive oil, so have entered the recipe accordingly. According to Stern, the bacon gives the soup a "wonderful smokey flavour." The recipe in the book also includes a wild mushroom saute, which would serve to garnish the soup. I've omitted this since I don't eat mushrooms. Inspired by Bonnie Stearn, More Heart Smart Cooking. Recipe entered by Ellen in Toronto. 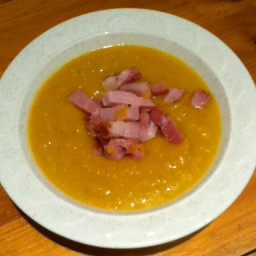 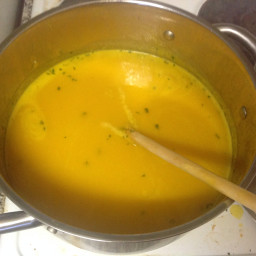 Found it to be quite watery. Any easy way of thickening? 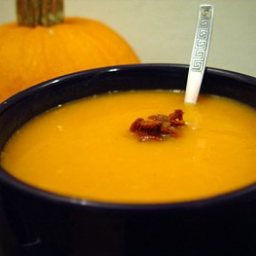 Sonybugg
The soup tasted a little flat to me so I added a tablespoon of honey, one and a half teaspoons of lemon zest, a little more pepper, and some coriander.
12y
Reply
Reply

stevemur
[I made edits to this recipe.]
15y
Reply
Reply