Try this Country Fried Steak recipe, or contribute your own.

For Emeril''s Essence: Combine all ingredients in a small mixing bowl and blend well. Store in an airtight container in your spice cabinet for up to 3 months. 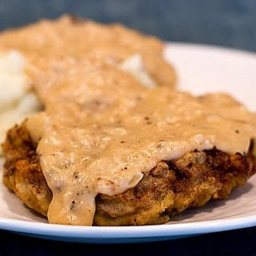 A long time favorite comfort dish in the South, Midwest, and Southwest United States, Country-fried or chicken-fried steak is great served with mashed potatoes and smothered with milk gravy. 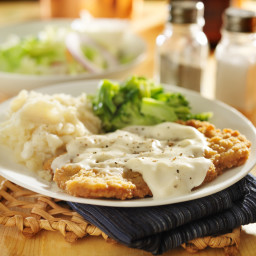 birdlover38
it was delish!!! husband and I made it together
8y
Reply
Reply

sgrishka
There could be some confusion with the name of this dish since there are two schools of thought when it comes to "country fried steak" and "chicken fried steak." Many believe the titles are one in the same and exchange them freely to describe steak that's been pounded, coated and fried, and served with gravy. Others believe there are regional distinctions between the titles and that they represent two different dishes. Country fried steak being a Southern dish; usually a battered and fried steak, made without an egg wash, that's smothered in either a brown or white gravy and simmered until the solid crust and gravy meld. Chicken fried steak being more typically Texan and Midwestern; usually a pounded, battered steak that's fried in a manner generally associated with chicken and served alongside or covered with a white pepper gravy. For me, since I am of the latter school, this is a "Chicken Fried Steak" recipe...and it was delicious! The bacon and onion infused milk gravy was terrific. We did alter the method slightly. To help tenderize the flank steak, we scored both sides of the meat. We dredged the scored meat in the seasoned flour prior to pounding and once again after pounding. We pounded the seasoned flour into the steak with the meat mallet to insure that the coating stayed put. We served this with mashed potatoes and homemade buttermilk biscuits.
12y
Reply
Reply