In a separate pan steam your asparagus to crisp tender, about 3 minutes.Sit aside until needed to add to the main part of the dish.

In a non stick skillet over medium heat, dice and fry bacon until crispy and browned. Remove bacon to a large bowl with a slotted spoon, reserve drippings for later in separate bowl (what I don't use I save in the referigerator for other recipes to add a bit of yummy unexpected flavor when I need it)

In same skillet over medium high heat. Add a tiny bit of oil and then add the chicken breasts, salt and pepper and cook through. Remove the same bowl as the bacon is saved in.

In same skillet, add the garlic and 2 T of bacon drippings to the pan and cook, stirring until fragrant. Don't brown. Tip in the broth and wine. Bring to a boil, scraping up the pan drippings and crispy bits. Boil until reduced by half. Add the cream and bring back to the boil. Boil, stirring, Add onions after about 2 minutes and continue cooking until the mixture thickens slightly.

Add chicken, bacon, herbs a generous pinch of salt and pepper, let simmer for about 3-5 minutes to blend flavors and thicken a bit more. If you desire a thicker mixture you can mix a bit of cornstarch and water together with a fork and add to the hot mixture and let thicken. Last stir in the asparagus so it doesn't get soggy.

Serve on top of Fettuccine or your favorite pasta, with a bit parmesan cheese on top... enjoy! 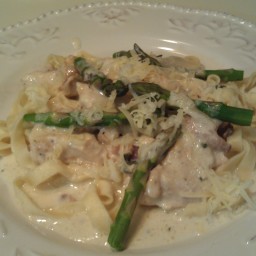