This recipe is a result of using 3 different ones and adjusting it to our taste. We cooked it for our 21st anniversary dinner for two and it was perfect. We hope you love it as much as we did. The grits is creamy but still thick; the shrimp and sauteed vegetables are combined with the cream sauce.

GRITS: combine the milk, butter, 1/2 tsp salt, 1/2 tsp white pepper (this is to not have black specks in the grits more than anything) in a saucepan over medium heat. Once simmering, gradually add grits, whisking in and stirring contantly. Reduce heat to medium and cook 4-5 minutes until thick, stirring occasionally. This should make a full 2 qt saucepan of thick creamy grits. Remove from heat, add 1/2 parmesan cheese and stir in mixing well. Set aside. (you can adjust a little butter, salt and pepper to taste if you like).

NEXT: Cook bacon until crisp, remove but keep the bacon grease in the skillet. Cast iron is best. Crumble the bacon and set aside. Saute the onion, garlic and peppers until onions are translucent. Stir in the chipotle chile and adobo sauce and parsley. Add the shrimp and cook until pink. At this point you can also do some adjusting to taste if you like. Spoon this shrimp and vegetable mixture into a bowl and set aside.

NEXT: To deglaze the skillet and make the cream sauce: Pour 1/2 white wine into skillet and stir to loosen browned bits of goodies from the pan (on low heat). Slowly add 1 cup of heavy cream and whisk together. Reduce a bit until it thickens up. Add a little salt and white pepper to taste. Add the bowl of sauteed shrimp and veggie mixture to the cream sauce and mix well over low heat. At this point you can also adjust to taste. I believe I may have added just a bit more adobo sauce for some spice (but that's just how we like it). When you have stirred and cooked this over low heat for about 5-10 minutes you can remove it from heat.

TO SERVE: Spoon grits into bowls, make a depression in the middle, and spoon the shrimp mixture on top. Garnish by sprinkling some chopped green onions on top.

FOR FANCY GATHERINGS it has been suggested by Paula Deen to use martini glasses for serving. Put grits in the bottom, shrimp mixture on top.

This is so delicious, you will never go to an expensive restaurant for shrimp and grits again!!!!

As always, TASTE, TASTE, TASTE! I always follow Gordon Ramsay's advice on this. If you oversalt, it is ruined, as with anything else. If you feel the grits needs a little more butter, do it. If you ever watch Paula Deen, butter is as important as breathing! Just don't overdo it. Follow this recipe as closely as you can but you can definitely make it your own. Have fun! 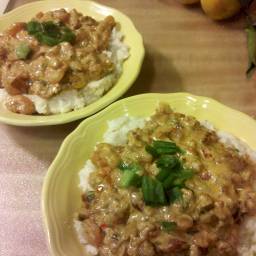