Try this Croatian Nut Roll (Orahnjaca) recipe, or contribute your own.

Sift together flour, salt and 1/2 cup sugar in a large mixing bowl. Heat cream and 3/4 cup water until lukewarm. Add egg yolks and melted butter. Dissolve yeast in 1/2 cup lukewarm water, and 1 1/2 tablespoon sugar and add the egg mixture. Make a well into the flour, slowly pour yeast mixture into the flour beating well with wooden spoon. On a slightly floured board, knead dough until it is elastic and smooth. If dough sticks to the board, add a little flour, knead 15 to 20 minutes. Place dough in a large bowl lightly greased, turning to grease top. Cover with a towel and let rise until double in bulk. Punch dough down. On a slightly floured board shape into a ball, then divide ball in half. Now shape each piece into a smooth ball. Place 1 ball in bowl and cover with a towel. Place the other on a slightly floured board, cover and let rest 5 to 10 minutes. Now roll as for jelly roll 11" x 5", spread the nut filling (after mixing ingredients well) and start rolling, rolling away from and pulling roll towards you each time you make a turn. Place in a greased pan 11" x 5", seam side down, prick about 10 times with a fork to release air. Brush with 1 egg yolk mixed with 1 tablespoon of sour cream. Cover and let rise until double in bulk. Bake at 350 for 45 minutes to 1 hour. Other ball can be filled with other filling. NOTES : From Hermine Sostarich of Brookfield, Wisconsin: My mother, Barbara Suveljak Hosni and father, Thomas Frank Hosni, Sr., passed through Ellis Island in September 1913 from Austria-Hungary. My mother decided I should have some of her recipes. As a result, we did a "stop and measure" as she prepared Nut Roll. Recipe by: Barbara Suveljak Hosni Posted to Digest bread-bakers.v097.n075 by snardo@onramp.net on Nov 23, 1997 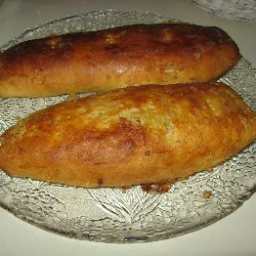 Not as good as Baba used to make, but almost.