Chowder is a North American cuisine, a hearty soup usually containing fish or shellfish, especially clams. The word chowder is a corruption of the French chaudiere ("cauldron"), and chowder may have originated among Breton fishermen who brought the custom to Newfoundland, whence it spread to Nova Scotia, New Brunswick, and New England. The standard New England-style chowder contains fish or shellfish, salt pork, onions, potatoes, and milk. Manhattan-style chowder replaces the milk with tomatoes. Eighteenth-century chowders were more varied; meat or poultry chowders were made, and wine, spices, herbs, cider, and other flavourings were often added. Pounded common crackers or ship biscuits served as thickening. In the Southern and Midwestern United States, fresh sweet corn (maize) often replaces the clams in chowder. Conch chowder is a specialty of Key West, Florida. [Encyclopedia Britannica]

Any combination of white fish works in this versatile recipe. Experiment!

Ladle into bowls; garnish with parsley and additional pepper. 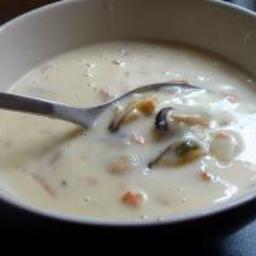 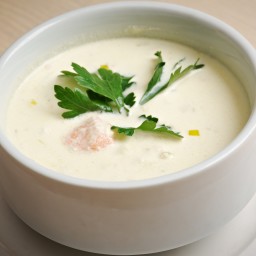 gordonsara
Add the fish much closer to the end of cooking time so it is not overcooked!
5y
Reply
Reply

Tatertotter
So Amazing, Mm Mm Mm! Perfect recipe for a perfect chowder, the best we've ever had! Will make often!!!
6y
Reply
Reply

yanina48
followed recipe exact, way too salty. if making this again, which I probably will not- I would not add any salt till very end. And definitely not the suggested amount of 1 1/2 tsp. tried to cut it with yogurt- that's all I had left in the house. and after adding 2 cups of yogurt- still too salty. I have also added the full amount of 2 cups of milk
6y
Reply
Reply

Firebyrd
Thanks! This is a fantastic way to use seafood in general, and it's always so very popular whenever I make it--a good indicator is no matter how much I double/triple the recipe, there's never any leftovers! shayeT1, people 'persist' in adding vegetables to this soup because it's traditional to do so, as you can read in the description above. It's not a 'substitution' for seafood, it's an enhancement to it, as any chef would tell you. Once you gain more experience in world cuisine I'm sure you will realize this as well. Happy Cooking!
6y
Reply
Reply

MrsJRH
This is really good! Made this with a few modifications. Used seafood stock instead of clam juice and added corn. I used Swai fish (freshwater catfish) and it was great and inexpensive. My family loved it and it taste better the next day.
7y
Reply
Reply

LaceBigOven
I am not a huge soup person but this recipe was GREAT!!!
7y
Reply
Reply