I had originally dubbed this "Heart Attack French Toast" but my friends quickly gave it a much shorter name. An artery clogger for sure.

Slice bread into 1" pieces then cut a slit lengthwise.

Begin preparing Hollandaise Sauce according to instructions on package (I like to use the Heavy cream for this, but Milk can be substituted for Heavy Cream anywhere in this recipe).

Prepare French Toast soak. Combine Eggs, Heavy Cream, Sugar, Nutmeg, and Cinnamon in a bowl large enough to fit your slices of French Bread. (Portions will vary depending on number of slices as desired sweetness). Beat mixture thoroughly with a fork or whisk.

Cut bacon slices in half (they fit better on the French Toast that way) and in large pan until it reaches desired consistency, set aside ... be sure you leave as much of the bacon grease in the pan as possible, you'll be using it.

Generously coat each slice of French Bread with the French Toast Soak mixture and fry in the bacon grease.

(Be sure you're keeping an eye on your Hollandaise sauce, we don't want the cream burning).

Once the French Toast slices are done set them aside as well, top with bacon.

Prepare eggs in desired manner (I like mine over easy, but scrambled seems to work well too). Add these to the top of the French Toast as well. 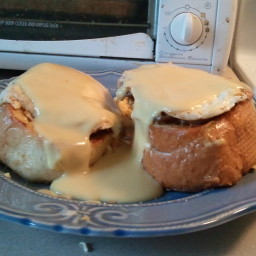