Same day, no marinating, even frozen meat recipe. Kids love it too.

1. Place broth and all seasonings except BBQ sauce in crock pot.

6. At the end of the time switch to hot or 1 hour. After which the pork should be in boiling liquid. It will start to separate when pushed down by a fork or spoon. Some spots will seem tougher but that's ok.

7. Take each piece out and using two forks shred. It is tedious but easy. Put all the shredded pork back in.

8. Add the BBQ sauce. The liquid will change from light to a deeper red. Cook for 30 minutes to an hour on low.

9. After the hour the meat will taste great but be very wet. Use a sieve and push into the meat so liquid is in the strainer but meat does not come over the edges. Use a ladle and scoop out clear liquid which is mostly fatty oil. I dispose of mine. Yup may have to do this in a few spots.

11. When ready to place on buns use the sieve, scoop some meat and stir some liquid out into the crock pot. This will keep your bun from getting mushy.

12. You can either stir more BBQ sauce into the meat, no extra sauce, or spread it on the bun.

13. I put meat on either half of the bun, sprinkle on cheese, and broil until melted then combine the halves,

14. Leftovers, save with juice, strain after microwaving.

*****i add jalapeños to mine before broiling. If you like hotter things. We make our buns too.

*********I've played with many kinds of BBQ sauce. Try to mix it up with pineapple, mango, unique sauces. Also Hawaiian smoked salts add a great kick.

Play with it. You can always add more time. But keep the juice and deal with straining to have a juicy pork. 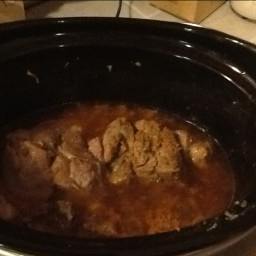 Boiling, how it looks just before shredding and adding BBQ sauce. 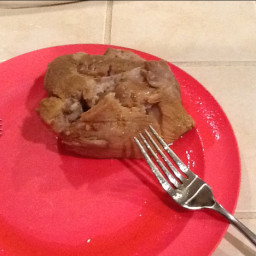 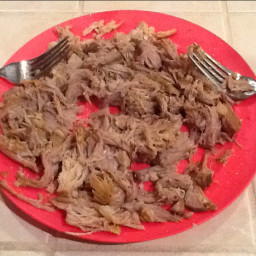 Shredded,ready to go back into crock pot 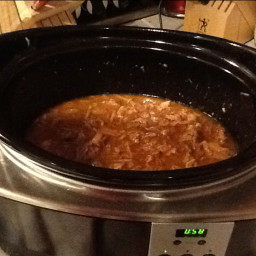 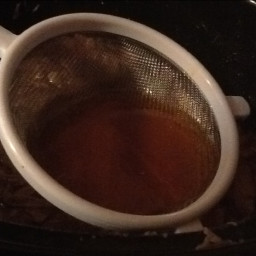 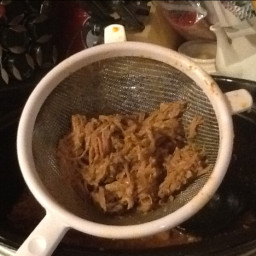 Drain some of the liquid

Personally, I prefer making it this way

"This makes a great filling for tamales, enchiladas, tacos and burritos. It can topped with sour cream, tomatoes, beans and lettuce. It can also be served with just the pork meat on a plate with some bread. This filling is also great combined with your favorite barbecue sauce and served on buns." —  Firebyrd

erin4miles
My teenager and husband LOVED this. I served it with broccoli. Leftovers for lunch tomorrow!
1y
Reply
Reply

FIRSTmom
I made this for a church gathering. Rather than use pork (since we don't eat pork), I used boneless skinless chicken thigh meat. It turned out amazing! My children said it was a little too spicy, but I am not sure if that was because of the spice in this or the BBQ sauce I made. Together it was AMAZING! Thanks for a great recipe.
6y
Reply
Reply

Tina_redheadnurse
Yummy! I couldnt keep my teenage boys out of it while it was cooking!
8y
Reply
Reply