Preheat oven to 300 degrees. Separate the eggs and put the yolks into one bowl and the whites into another much larger bowl.

In the large bowl, whip egg whites and lemon juice until stiff peaks form and set aside. In the other bowl add salt, and DCCC to the yolks. Beat the egg yolk mixture till smooth. Gently fold the yolk mixture into the egg whites with a spatula, being careful not to break down the whites. Fold until the mixture is an even yellow but no longer.

Line a cookie sheet with parchment paper or grease it well with lard or coconut oil. Make small mounds of the mixture on the cookie sheet. These will only flatten slightly while cooking so make them the shape and size that you want the finished product to be and flatten if necessary. I use a large serving spoon and it seems to hold just the right amount for one bun.

Bake about 30 minutes (less if they are smaller. You want these slightly soft not hard and crunchy). Let cool on the sheet for a few minutes, and then remove to a rack and allow them to cool completely before storing in an airtight container or they will get soggy. 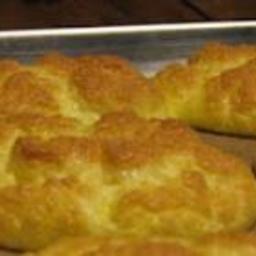