Preheat the oven to 475 degrees F.

Combine the onions, flour, panko and salt in a large mixing bowl and toss to combine. Coat a sheet pan with nonstick cooking spray and evenly spread the onions on the pan. Place the pan on the middle rack of the oven and bake until golden brown, approximately 30 minutes. Toss the onions 2 to 3 times during cooking. Once done, remove from the oven and set aside until ready to use. Turn the oven down to 400 degrees F.

While the onions are cooking, prepare the beans. Bring a gallon of water and 2 tablespoons of salt to a boil in an 8-quart saucepan. Add the beans and blanch for 5 minutes. Drain in a colander and immediately plunge the beans into a large bowl of ice water to stop the cooking. Drain and set aside.

Melt the butter in a 12-inch cast iron skillet set over medium-high heat. Add the mushrooms, 1 teaspoon salt and pepper and cook, stirring occasionally, until the mushrooms begin to give up some of their liquid, approximately 4 to 5 minutes. Add the garlic and nutmeg and continue to cook for another 1 to 2 minutes. Sprinkle the flour over the mixture and stir to combine. Cook for 1 minute. Add the broth and simmer for 1 minute. Decrease the heat to medium-low and add the half-and-half. Cook until the mixture thickens, stirring occasionally, approximately 6 to 8 minutes.

Remove from the heat and stir in 1/4 of the onions and all of the green beans. Top with the remaining onions. Place into the oven and bake until bubbly, approximately 15 minutes. Remove and serve immediately. 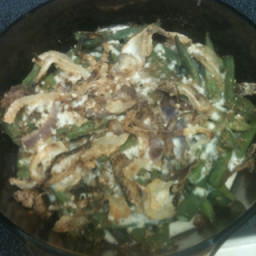 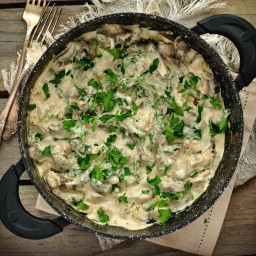 Kellyfoos
This is fantastic! I sprinkled sharp cheddar over the top before baking. I think that made it even better.
8y
Reply
Reply

vikstain
So tasty! Found it to be a bit sloppy so I added one large fresh chopped carrot and did not add any milk. Will be making this again!
10y
Reply
Reply

mpchristian
Yes, got it from the magazine and made it a few years ago - my whole family loved it and it's way healthier than the one with the canned soup!
11y
Reply
Reply

Sportechic
Is this the Alton Brown 'Not Your Mamas Green Bean Casserole'? It has GREAT reviews on FN. =)
11y
Reply
Reply