A rich and tangy soup that warms your bones in the Fall and Winter. Particularly yummy with the addition of roasted fresh Roma Tomatoes and Blue Cheese.

Rub a bit of olive oil on your hands, and coat each of the tomato halves. Sprinkle with garlic or garlic salt. Place them on a rimmed baking sheet, and roast in the oven for 30 minutes. I always cover pan with foil before roasting for easy cleanup. Remove from the oven, and chop the tomatoes roughly in a food processor or by hand.

May use pre-Cooked Bacon Bits or I n the bottom of your soup pot, cook the bacon over low heat until it's as crisp as you like it. Remove the bacon onto a plate covered with paper towel, and set aside. Leave Bacon drippings in the pot!

Over med-low heat, add the butter into the pot, along with the onion, celery and carrot. Cook, stirring occasionally, for 1-4 minutes, until the onion is translucent. Stir in the flour, and mix well until it's completely incorporated with the butter in the pot. Pour in the chicken stock (1 cup at a time), and stir well until the stock thickens slightly with each cup of stock.

Add the crumbled cheese and roasted chopped tomatoes. Bring the soup to a boil over med-low heat stirring to help melt the cheese. Stir occasionally. Remove the pot from heat, and use an immersion blender to puree the soup until smooth. (Or, let the soup cool slightly, and process in batches in a blender or food processor; then, return the soup to the pot.) *Note: you do not have to do this step at all. Soup tastes the same regardless.

Return the pot to the stove, and over low heat stir in the half-and-half. Cook for one minute, until the soup is hot but not yet simmering.

Take care with the soup after you add the cream. It will tend to stick on the pots bottom while cooking. Stir often and leave on low if you're not dining right away. Or wait until the last 10 minutes until you done to add cream and warm through the soup. 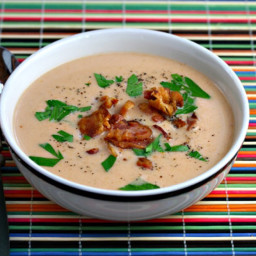 Metaphoric
Found this amazing recipe on Soup Chick and she found it via Best of Irish Soups by Eileen O'Driscoll. I added a couple possible adjustments and shortcuts if you just don't feel like trudging to the store for tomatoes. Enjoy!(
6y
Reply
Reply