If you’re a mushroom lover, use different varieties of mushrooms like shiitake, portobello or cremini in this rich, savory sauté. For extra flavor, try using olive oil from the jar of tomatoes in lieu of regular olive oil.

Heat 1 tablespoon of the oil in a large skillet over medium high heat. Add mushrooms, salt and pepper and cook, stirring occasionally, until softened, about 5 minutes. Add tomatoes and garlic and cook another 2 minutes. Stir in kale and 1/4 cup water, cover, reduce heat to medium low and cook until kale begins to wilt, about 2 minutes. Toss well, season with salt and pepper, cover and cook until wilted, about 2 minutes more. Cover and set aside.

Heat remaining 1 tablespoon oil in a large nonstick or cast iron skillet over medium high heat. Arrange polenta in skillet in a single layer (working in batches, if needed) and cook, flipping once, until golden brown on both sides, 5 to 6 minutes total. Transfer polenta to a paper towel-lined plate as done.

Arrange polenta on plates, spoon kale and mushroom mixture over the top, garnish with cheese and serve. 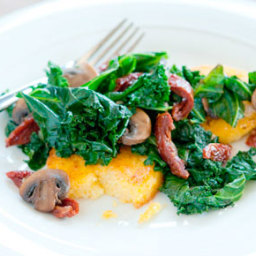 vivshu
This is a light meal, but tasty, healthy and easy to boot! I'm not a big fan of polenta, but it works here and I'm making it a second time soon. Instead of sun dried tomatoes I used home made oven dried tomatoes, which worked fine, and I think using a more flavorful oil would be good too (I'm thinking bacon but that might negate the "healthy" part).
7y
Reply
Reply