Wonderful healthy dip option that tastes fabulous! Served this at Bunco and everyone loved it!

1.To make the cilantro pesto, combine the cilantro, garlic, 2 tablespoons of the olive oil, pecans, and pine nuts in the bowl of a food processor. Pulse repeatedly until a coarse paste forms. Scrape down the sides of the bowl. With the processor running, add the remaining olive oil in a steady stream and process until smooth. Transfer the pesto to a bowl and stir in the Parmesan. (If storing for later use, drizzle with a thin film of olive oil, cover with plastic wrap directly on the surface of the pesto, and store in an airtight container.)

2.To assemble the dip, spread a layer of hummus on a serving platter. Spread the cilantro pesto over the top of the hummus. Layer evenly with cucumber, red onion, banana peppers, olives, feta, and oven-dried tomatoes as desired. Garnish with an additional few tablespoons of minced fresh cilantro. Serve with pita chips. 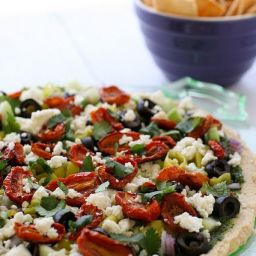