Easter, Xmas, or entertaining a crowd!

1. Preheat oven to 325. Place ham in shallow roasting pan. Score ham by making diagonal cuts, 1/4 inch deep, in a diamond pattern. Insert an oven-going meat thermometer into center of ham; the thermometer should not touch the bone, if present. Roast for 1-3/4 hours if using bone-in ham or 1 hr using boneless ham.

2. Meanwhile, in a bowl combine 3 tablespoons of the brown sugar, the 3 tablespoons mustard, and rosemary. Brush mixture over ham. Roast for 15 minutes more. Meanwhile, for glaze, in a 2-quart saucepan combine the remaining brown sugar, the pineapple juice, and 1/4 cup mustard. Bring to boiling over medium heat, stirring frequently. Remove 1/2 cup glaze to brush over ham. set aside.

3. Bake ham 30 minutes more or until thermometer registers 140f, generously brushing with the 1/2 cup glaze several times during the baking. 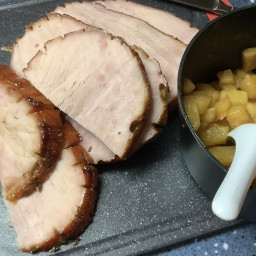 chrisNden
This HAM recipe is for when you want oven to warm the house. If you grow rosemary, it is Delicious in this. Clip off the tender tips and chop fine to use in the brown sugar paste. Buy a container of fresh pineapple and use its juice for the glaze prep. Don't need canned juice. Take ham out of fridge 2hrs early to come to RT.!! Start oven low at 325. After 1h for a 3lb ham, cut off and discard the RIND. Score the fat/meat below and smear with the BrwnSug paste. Cook another half hour. Can put potatoes /other sides into oven at this time also. After the half hour, start brushing on the pineapple glaze AND turn oven up to 425f if ham temp is low. The glaze should be in a small bowl that you took from the sugar-juice mix you cooked on the stove. Do not use drippings! You are glazing, not basting, the ham. This recipe does not say to turn up temp but I had to, because the 3lb ham was only at 115 after 1.5h. I had to increase oven temp to 425f in order to bring ham internal temp to 140f. The fresh pineapple chunks should be cooked in the remaining brown-sugar glaze until soft and tawny with the brown sugar. Take cover off at the end to allow steam to escape and thicken the juice. Delicious eaten with each bite of ham!
9m
Reply
Reply