A less expensive cut of beef which is pickled, cooked in the marinade and then served with a sauce which is created by adding gingersnap cookies and sour cream.

Place the beef which has been trimmed of extra fat into a glass or plastic container (with a lid) that will hold it's size with the marinade. When the marinade has cooled to room temperature, pour over the beef, cover and refrigerate for 2 or 3 days. Depending on the size and shape of your piece of beef, if not totally covered with the marinade, then turn it over every 12 hours.

The day of cooking, remove the meat from the marinade and pat dry with paper towels. Remove the seeds and peppercorns that stick to the meat. Strain the marinade, discarding the onion and spices and reserving the liquid.

Use a large (5-6 quart) pot with a lid to cook the roast and veggies after browning in a large skillet. Heat the oil in a large skillet over high heat and brown the meat on all sides, about 20-30 minutes total. Place the meat in the pot. Using the same skillet add chopped onion carrots and celery and cook over medium heat until soft and lightly brown, about 10 minutes. Sprinkle the flour and 1 teaspoon salt over the veggies in the skillet and continue to cook for 3 or 4 more minutes, constantly stirring. Pour in the 1/2 cup wine over the veggies in the skillet, stir and pour all into the pot with the meat. To the pot holding the beef and veggies add the reserved strained marinade. Bring to a boil, reduce heat to a simmer and cook gently for 2 1/2 to 3 hours, until the meat is fork tender.

Remove the meat to a platter and cover to keep warm. Using a spoon, go along the top surface and remove any fat in the pot which the meat has rendered.

Add the gingersnap cookies and stir until the cookies dissolve and thicken the sauce. Remove from heat and using a whisk stir in the sour cream.

Adjust salt and pepper and serve the sauce over the meat. Garnish with parsley.

Serve with dumplings or boiled potatoes. 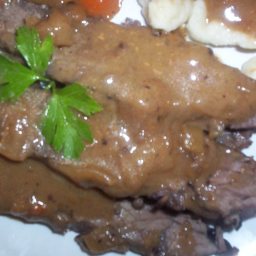 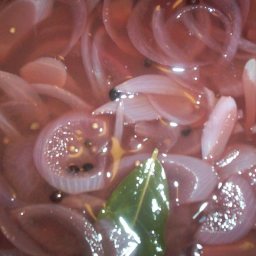 toddellenson
I cannot begin to explain how excellent this was!! This is my absolute favorite meal that I have made BY FAR. I just finished my left overs the other night and I'm still craving more. I am definitely making this again. I served this with German Potato salad that I make and Spaetzel. AMAZING.
9y
Reply
Reply

BengalCajunChef
Just got back from Vienna (Austria) and made this for my hosts along with one of the potato dumpling recipes and shredded cabbage with apple cider vinegar and pumpkin seed oil. They proclaimed it (the sauerbratten) better than their version. The time of marinade is the key-2 days minimum and 3 days if at all possible. Also I recommend a dry red wine for the marinade as it seems to leave a better aftertaste and is more palate cleansing than a sweeter red wine.
12y
Reply
Reply

misselainey
I am off to Germany in two weeks and I don't think I will get a better sauerbraten This is amazing I highly recommend and leave for at least two days!!
13y
Reply
Reply

weckle
This is so worth the 2 to 3 day wait for the marinade to do it's job! I like to serve spaetzle, dumplings, boiled potatoes or egg noodles along side with the delicious sauce!
13y
Reply
Reply

sherlocki
I haven't made Gina's sauerbraten yet but she made it and I was lucky enough to sample some for dinner. Absolutely delicious! The perfect dish to welcome in the fall weather.
13y
Reply
Reply

weckle
A lot of flavor from an inexpensive cut of beef. The aroma while cooking is amazing! [I posted this recipe.]
13y
Reply
Reply