A tangy and highly flavoursome salad, that's cheap, easy and suits any occasion.

Take apart lettuce and wash. Arrange the largest portions around a large bowl so that leafy ends point upward in a ring. Chop remainder of lettuce into finger-sized squares or strips.

In a frying pan, brown prosciutto, anchovies and capers. Anchovies are done when almost powdery and can mix quite easily. Capers can be squashed into the pan with a spatula or wooden spoon. After this, mix anchovies and capers into the ''sauce of choice'' (obviously had I known how to make the sauce I would've called it something like ''Paul's Astounding Caesar Sauce''), while leaving the shrivelled (cooked) proscuitto on a plate with a paper towel to absorb all the oil.

Next boil the eggs, peel the shells off and slice into portions, strips or...er...''caesarians''.

For the bread, either butter or (if you''re in a hurry) spray each side with oil spray and throw in the toaster until brown. Slice into small squares.

In a separate large bowl, mix the chopped lettuce, egg slices, 1/2 the quantity of drained proscuitto and stir in the sauce until its covering everything, but not drowning in it. Pour this mix into the leafy bowl and sprinkle with proscuitto, croutons and finally a layer of parmessan cheese. 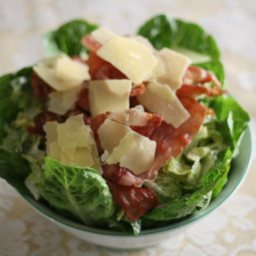 paulglaister
[I made edits to this recipe.]
12y
Reply
Reply

paulglaister
[I made edits to this recipe.]
12y
Reply
Reply