This is a bold, flavorful salad that is full of nutrients and protein. It's delicious and filling.

In a large bowl, place spinach, tomatoes and beans.

Stir vinegar, Truvia, pepper and salt together in a small bowl until sugar dissolves. Set aside.

Fry bacon in a medium skillet over medium high heat until crisp. Place on plate covered with a paper towel. Pour bacon fat into heatproof bowl, then return 3 tablespoons bacon fat to skillet. Add onion to skillet and cook over medium heat, stirring frequently, until slightly softened. Stir in garlic for about 15 seconds. Add vinegar mixture and remove skillet from heat.

Divide among individual plates. Arrange egg quarters on top and sprinkle with the toasted almonds. 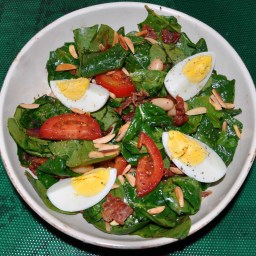 shilohann
I served this with our pork chop dinner and it was wonderful! I didn't have Truvia but used Equal instead. It was really tasty and easy. Thank you so much for this delicious recipe.
11y
Reply
Reply

Loshebo
This wilted spinach salad has a wonderful, bold flavor to it. Very filling....a meal in itself. I posted this.
11y
Reply
Reply