This is delicious carbonara, fairly quick.

1. Chop a few strips of bacon into small chunks. By the way, this is the best bacon I've found out there. It's "Wright" bacon, and when you open the pack it smells like smoky goodness. It's very thick and super flavorful. Also, at this point, begin cooking your fettuccine pasta until al dente and set aside (Don't forget to add a generous amount of salt to the water as boiling begins).

2. Sautee bacon chunks until fat is rendered and bacon is crisp. After bacon has rendered, take out of the pan with a slotted spoon and empty half of bacon oil.

3. While bacon renders take care of all of your veggie chopping and preparation.

4. Add Olive Oil, onions, and a pinch of salt to pan, cook for a few minutes until onions are browned. Once onions have browned a bit add garlic and cook until fragrant.

5. Add peas, half amount of chives, and pinch of salt to pan. Allow to cook for a minute or two until peas are cooked through.

7. Finish with Parmesan cheese and serve in large bowl. Put a couple of chives on top to make it look extra awesome and gourmet... 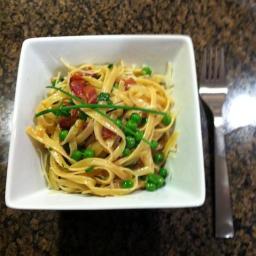