Try this Arroz Con Pollo recipe, or contribute your own.

Meanwhile, heat 1 tablespoon oil in Dutch oven over medium heat until shimmering. Add onion and pepper flakes; cook, stirring occasionally, until the onion begin to soften. Push the onions and peppers to sides of pot and increase heat to medium-high. Add chicken to clearing in center of pot, skin side down, in even layer. Cook, without moving chicken, until outer layer of meat becomes opaque. (If chicken begins to brown, reduce heat to medium). Using tongs, flip chicken and cook on second side until opaque. Add ketchup, broth, and water; stir to combine. Bring to simmer; cover, reduce heat to medium-low, and simmer for 20 minutes.

Add rice, olives, capers, bell peppers, half of the chopped cilantro, Sazon and 3/4 teaspoon salt; stir well. Bring to simmer, cover, and place pot in oven. After 10 minutes, remove pot from oven and stir chicken and rice once from bottom up. Return pot to oven. After another 10 minutes, stir once more, adding 1/4 cup water if rice appears dry and bottom of pot is beginning to burn. Cover and return pot to oven; cook until rice has absorbed all liquid and is tender but still holds its shape and temperature of chicken registers 175 degrees on instant-read thermometer, about 10 minutes longer. 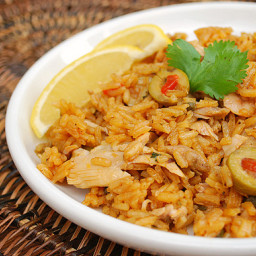 mrswilder
Came out wonderfully - especially for a cold winter night. Notes to make it simpler: Rice does not cook completely in oven - next time I'll bring it to a boil on top of the stove then cover and simmer like you normally would cook rice. In doing this, the chicken will need to be cooked more before you cook the rice. It is a little on the "warm" (spicy) side but not HOT.. might want to play around with the spices next time but over all a really good "stick to your ribs/warm you up" dinner and even better the next day for lunch!!!
7y
Reply
Reply