A wonderful flavor-filled meal that really fills you up. I took ideas from a few other recipes on here and I made it my own. Simply delicious!

Preheat an oven to 350 degrees F (175 degrees C). Place the bacon in a large, deep skillet, and cook over medium-high heat, turning occasionally, until evenly browned but still soft. Reserve the bacon grease in the skillet, and cool the bacon slices on a paper towel-lined plate. Once cool, mix the bacon together with the feta cheese, 3 tablespoons of sour cream, oregano, and black pepper in a small bowl; set aside.

Reheat the bacon grease over medium heat. Brown the chicken breasts on both sides in the hot fat, about 2 minutes per side. Reserve the bacon grease in the pan. Place the breasts on a baking dish, and bake in the preheated oven until the chicken is no longer pink and the filling is hot, 20 to 25 minutes. An instant-read thermometer inserted into the center should read at least 165 degrees F (74 degrees C).

Meanwhile, place the potatoes into a large pot and cover with salted water. Bring to a boil over high heat, then reduce heat to medium-low, cover, and simmer until tender, about 20 minutes. Drain.

While the potatoes are boiling, cook the onion in the remaining bacon grease over medium heat until very tender and golden brown, about 10 minutes. Once the potatoes are done, mash together with the onion, butter, and remaining 3 tablespoons of sour cream. Serve the chicken breasts accompanied by the mashed potatoes.

It's always tempting to cook chicken longer, do NOT in this instance. Using 3, thick, boneless, skinless breasts, be sure to cook no more than the amount specified. (Nothing worse than overdone, dry chicken!) 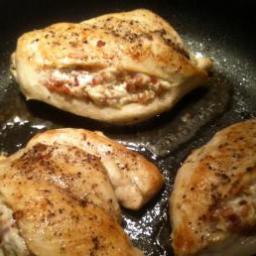 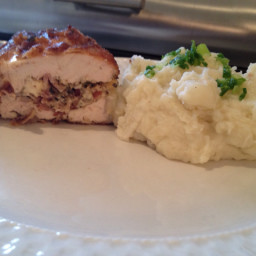 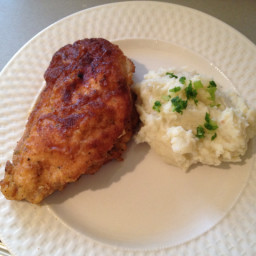 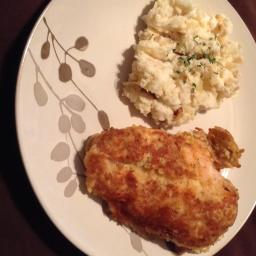 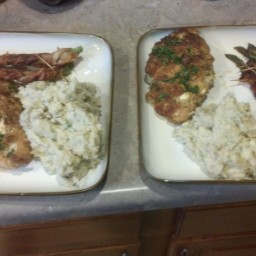 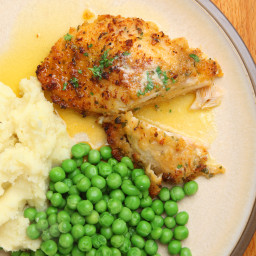 edrizzle630
I was too lazy to bread mine, so I and baked them without the breading at 375 for 30 min (they were big). SO good. I will make this again!!
8y
Reply
Reply

paulshelton
Let me make a suggestion. Cook the onions in the grease before you cook the chicken. Cross contamination nightmare.
8y
Reply
Reply

Firebyrd
I'm thrilled so many of you have enjoyed this! This is also one of my favorite recipes and is often requested by my friends & coworkers. Packed with flavors as it is, I'm proud this gourmet recipe is now used across the country!
9y
Reply
Reply

Lab1119
Eh...not bad. Just a little bland for all the work that went into it.
9y
Reply
Reply

Loreniscool
This dish is great! I made it for a dinner party and it was a hit. The steps to this meal are not really difficult but just a bit tedious. The end result is way worth it! I will definitely be making again.
9y
Reply
Reply

JWill757
I made a friggin' mess of my kitchen making this, but it is DELICIOUS. If you're not all that seasoned in the kitchen (like me) this may be a bit difficult to make and takes a long time, but the meal itself is excellent.
9y
Reply
Reply

RobynRahn
As Drallen said, a little challenging for me as well for a beginner but I pulled it off!! It turned awesome!
9y
Reply
Reply

Drallen9
Delicious and filling! A little challenging for me, but well worth it after I received such rave reviews from my family!
9y
Reply
Reply