Working in small batches (or using a large food processor) process the gazpacho ingredients (except the salt and pepper) into a chunky puree. You want to have some texture to the dish so don't over-process it into a "soup". Chill for at least 3 hours then adjust flavor with salt & pepper (and perhaps some lemon or lime juice) to taste. It is important to chill before adjusting flavors as dishes taste different when cold.

Thaw the shrimp if frozen. Drop the shrimp into a large pot of boiling, salted water. Cook ONLY until they turn pink (about 2 minutes) then transfer to a bowl of ice water to stop the cooking.

Peel, devein, and split the shrimp lengthwise. Toss the shrimp halves with the Cajun spice and olive oil and allow to marinate for at least one hour.

Dish up about 1 cup of gazpacho and top it with 3-4 shrimp halves. Garnish with a sprig of cilantro. Serve on a well chilled plate.

Making the Gazpacho without the shrimp and serving 1-1/4 cup (1/8 recipe) gives an estimated:

This made a very nice summer lunch. Especially with fresh Gulf shrimp being in season. It was diet friendly also. 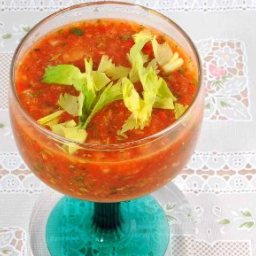 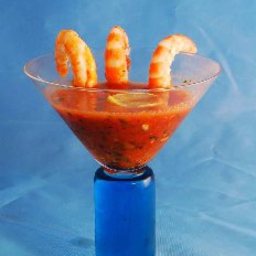 promfh
This made a very nice summer lunch. Especially with fresh Gulf shrimp being in season. It was diet friendly also. [I posted this recipe.]
15y
Reply
Reply