Try this Greek Salad (Best-Ever Salads-America's Test Kitchen) recipe, or contribute your own.

2. FOR THE SALAD: Stir cucumber and onion into vinaigrette and let stand for 20 minutes. Add lettuce, tomatoes, red peppers, parsley, and

mint and toss gently to coat. Transfer salad to serving bowl and sprinkle with olives and feta. Serve.

**In Greece, salty, crumbly curds of feta are still made with methods dating back to the Trojan War. Other European countries also make versions, but in 2005, the European Union ruled that only cheese produced in Greece from at least 70 percent sheep's milk can rightfully bear the label 'feta'. Here in the United States, where these stipulations don't apply, domestic and imported imitators abound. We tasted five products- two Greek fetas, on French version, and twp American cheeses. Tasters overwhelmingly preferred the taste of the sheep's-and goat's-milk imports. Our winner was the real deal: Mt. Vikos Traditional Feta, made with 80 percent sheep's mil, hails from the mother country and balances plenty of tang with just enough salt. 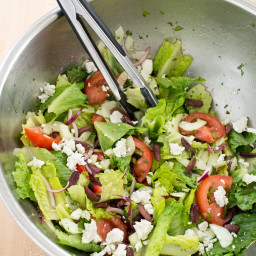 lisagreenleaf1
If there were more stars..I would add them!!
2y
Reply
Reply