3.Preheat a grill pan over medium heat. Season halibut with remaining salt and pepper. Rub both sides of fish with remaining 3 tablespoons olive oil and transfer to grill pan. Cook, turning once, until cooked through, about 4 minutes per side. Remove from grill and cut into small pieces.

4.Divide fish evenly among the tortillas. Place 1 tablespoon chopped onion and 1 tablespoon cilantro leaves over fish. Top each with a piece of tomato. Add salsa and squeeze over lime halves; serve immediately. 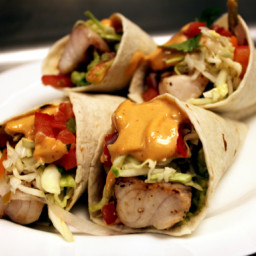 NandM
Delicious fresh and light tacos. The flavor of the fire-roasted poblanos is a nice touch.
8y
Reply
Reply