A delicious alternative to turkey or roast for an extended family dinner.

Sprinkle inside of loin with salt and pepper. Stuff with mixture of rosemary, chopped bacon, and garlic and secure with toothpicks or cooking twine.

Place in large casserole dish and surround with carrots and potatoes. Pour broth over veggies and meat. Season with salt & pepper. 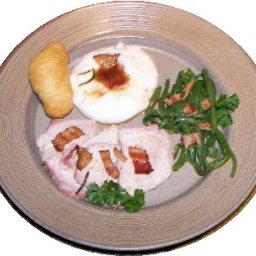 stevemur
Hi swibirun -- I love all your recipes. Just a question about this one -- looks great, but is this mis-named? It's currently called "grilled pork loin", but it seems to be baked/roasted. Am I missing the "grilling" step?
14y
Reply
Reply