Try this Grilled Porterhouse with Over-Stuffed Baked Potatoes recipe, or contribute your own.

Preheat the oven to 400 degrees F. Season the potatoes with 1 tablespoon of the oil and salt. Place on a baking sheet and place in the oven. Cook until fork tender, about 1 hour. Remove and cool. In a saute pan, over medium heat, render the bacon until crispy, about 6 minutes. Remove and drain on paper towels. Peel one potato completely and slice 1/4 of the top off each of the remaining potatoes. Using a spoon, scrape out the flesh of each potato into a mixing bowl.

Add the whole peeled potato to the mixing bowl. Using a hand held masher, mash the potatoes until smooth. Add the butter, sour cream, half of the cheese and the chives. Season with salt and pepper and mix well. Spoon the potato mixture back into the potato shells. Top the potatoes with the remaining cheese and the bacon. Place back on the baking sheet and bake until the cheese melts, about 8 to 10 minutes. Preheat the grill. Season the steaks with the remaining olive oil, salt and pepper. Place the steaks on the grill and cook for 4 to 6 minutes on each side for medium rare. Remove from the grill and allow to rest for a few minutes before serving. 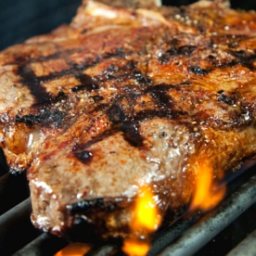 A wonderful Porterhouse steak being grilled to a delicious medium-rare. 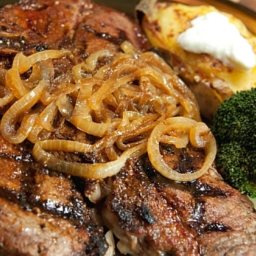 We smothered our Grilled Porterhouse with Beer Braised Onions, served the Over-Stuffed Baked Potato with a dollop of Sour Cream, and accompanied them with Grilled Broccoli.

sgrishka
A simple steak and potatoe recipe that impressed all our guests. To spend more time with our guest, we baked and stuffed the potatoes a day ahead and refrigerated them. To finish the potatoes, we removed them from the refrigerator and let them come to room temperature before warming them in a 350 degree F oven until the cheese had melted and started to lightly brown, about 20 minutes.
11y
Reply
Reply