I love this stuff! Get ready for food coma.

Chicken breasts can be cooked whole, or cubed. Lightly coat the chicken in lemon pepper, and brown in the butter over medium-high heat in a large, high-walled pan or electric skillet (my preference).

While the chicken browns, combine the soup, sour cream and cheese in a large mixing bowl. Mix well, set aside. Drain the artichoke hearts.

Once the chicken is browned to your liking, drain any excess butter and add the soup/sour cream/cheese mixture. Coat the chicken with the sauce and allow to simmer for 30 minutes, stirring occasionally.

About 10 minutes into simmering, you should fill a large pot with water, add a pinch of salt and a small amount of olive oil (optional), and set it to boiling.

After about 20 minutes of simmering, your water should be boiling. Add the pasta. Also stir in your artichoke hearts to the sauce for the remaining ten minutes cooking time.

Once the pasta is finished, it can be mixed in to the sauce mixture (the preferred method if cubing the chicken).

Serve with asparagus or other green vegetable. Or none ... it's plenty to eat by itself! 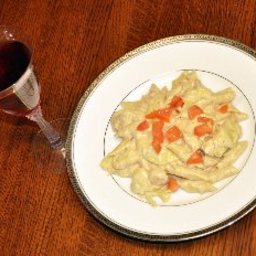