Both parts of this recipe require extensive down-time, so make sure you plan ahead and leave enough time for cooking and chilling. To make the dough, start by combining the butter and 1/2 cup of sugar in the bowl of stand mixer (or use a large bowl and a hand mixer.) Beat them together on medium speed until light and fluffy, about 2 minutes.

Add the egg white, the grated zest of half an orange, and the vanilla extract, and beat everything together until you have a silky smooth mixture. Scrape down the sides of the bowl and the beaters. Add the flour, and mix on low until everything is mixed together and there are no streaks of flour remaining.

When you're finished, you should have a soft dough similar to a sugar cookie dough. Wrap it tightly in plastic wrap and refrigerate it until it's firm enough to roll, for about two hours.

While you wait for the dough to chill, it's time to get figgy with it! (Yes, I've been dying to use that joke this whole time.) Take those beautiful moist Calimyrna dried figs and chop them up into small pieces.

Combine the chopped figs, water, apple juice, and 1/4 cup of sugar in a medium saucepan, and bring it to a boil over medium heat. After it starts boiling, reduce the heat to low and simmer it until the figs are soft and practically disintegrating, anywhere from 90 minutes to 2 hours. Stir the figs occasionally so they don't scorch on the bottom of the pan.

When the figs are done, most of the water will have cooked off and they will have the consistency of a thick, sticky jam. Isn't this already starting to look like the filling inside a Fig Newton? Cool the fig mixture at room temperature or in the microwave.

Transfer the fig mixture to a food processor or blender, and add the grated zest of half an orange. Blend until you have a smooth paste.

Now it's time to bring together the two halves of our Fig Newton puzzle! Preheat your oven to 350 degrees F.

Take your chilled dough from the refrigerator and dust a work surface and rolling pin with flour. The dough will get sticky as it warms up, so it's best to do this quickly and avoid adding any more flour than necessary. Roll the dough out into a very thin rectangle, about 16 inches long by 12 inches high. Remember how thin the cookie part of a Fig Newton is? Yeah, it's a wee little layer. That's what we're going for.

Now take a handy-dandy ruler--or just use your eyeballs and estimate--and cut your dough into 4 strips, so that you end up with 4 long thin rectangles 4 inches across and 12 inches high.

Take about a quarter of the fig mixture and spread it along the center of one of the strips of dough. Gently fold one side over the fig mixture, then fold the second side over the first, so that you are left with a long tube of dough enclosing the fig filling. Repeat until all four dough strips have been filled and folded.

Gently (gently!) transfer the strips of dough to a parchment-covered baking sheet. I found it was easiest to do this by sliding them onto a long metal spatula, but even a large chef's knife might work for his purpose. You can either cut them into cookies before or after baking--I prefer before, because I think it's a little easier to get clean cuts that way, but either way works fine.

Bake the cookies in the 350 degree oven for 12-15 minutes, until they're puffed and golden brown around the edges.

I always hate it when people say this about baked goods, but it must be said: these cookies are even better the next day! Fresh from the oven, the cookie layer is a little crispy, more like a shortbread. But after they've had time to mellow, it softens, and the cookies and figs melt into each other a little more, and they are deee-licious.

Now that you have the basic Fig Newtons recipe, try making other variations--what about adding some chopped apple in with the figs? Or raspberries? Or ginger? You can do it all! (But not together, please.) 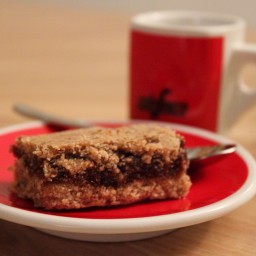 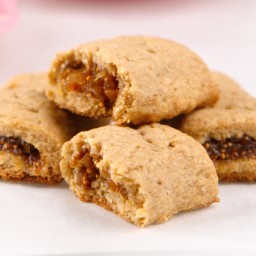