Yeah I know. "Fire roasted" and "naked" are two terms that are usually never a good thing when used together.

But these little babies are a definite exception to the rule.

Okay, first things first, I have no idea if it was one pound of spinach. It was one very full salad spinner of spinach that we triple rinsed to get all that grit off. My best guess is it was about 1 lb.

Cook the spinach in a large saute pan over medium high heat until wilted, using only the water the was left after rinsing. Remove and press out water.

Chop the spinach and mix into the cheese mixture. Add in the flour. Then add in the panko in 1/4 cup increments until the mixture is thick enough to form into balls. (One recipe had no flour and neither had the bread crumbs but it just wasn't coming together for me and it worked out in my favor!)

Get flour on your hands to prevent sticking and scoop out an ice cream scoop sized amount. Work into a ball. Repeat like a million times until it's all gone. I might be exaggerating on the "million" part. Maybe it was more like 2 dozen.

Preheat a pizza stone on a grill at about 450-500f. On a Big Green Egg, that is plate setter in, "legs down" with the pizza stone on top. But you could do the same thing on any grill or even in your 'gasp' oven.

Sprinkle some flour on the stone to prevent sticking and put the naked ravioli on the stone. Cook until they firm up. Carrabba's recipe called for boiling them in chicken broth for 2-3 minutes which spelled disaster to me and Fabio said bake them 5 minutes at 500f. I ended up going 10 minutes at about 450f.

Note, you will get a little bit of browning but you are going more for texture, not a "golden brown" that you might with baking. You are going for a firm enough texture to pick them up. Just imagine a ravioli that has been cooked and then have the pasta shell striped off.

While they cool, melt a stick of butter and saute 2-3 leaves of sage until crisped. Drizzle sage butter over the ravioli (who doesn't like hot grease poured over them when they are naked, right?).

I was going to plate them with the crisped sage and shavings of parmigiano reggiano but the sage was butt ugly so I went with fresh sage and red pepper flakes for a garnish.

I have been wanting to try these for about a year but just got around to making them tonight after Alexis scored some great spinach from the Market Square Farmer's Market on Saturday. I based the recipe on Naked Ravioli from Johnny Carrabba's book Ciao Tuscony, was influenced by Fabio Viviani's technique, and then improvised as things went awry & I brought live fire into the mix. 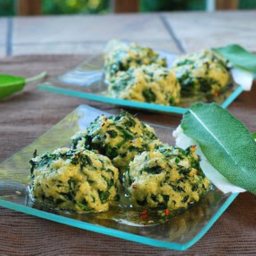 swibirun
I have been wanting to try these for about a year but just got around to making them tonight after Alexis scored some great spinach from the Market Square Farmer's Market on Saturday. I based the recipe on Naked Ravioli from Johnny Carrabba's book Ciao Tuscony, was influenced by Fabio Viviani's technique, and then improvised as things went awry & I brought live fire into the mix. [I posted this recipe.]
12y
Reply
Reply