Stuffed pizza, especially stuffed spinach pizza is a Chicago signature dish, much like cheese-steak sandwiches are to Philly, baked beans are to Boston. This version of stuffed spinach pizza is heavenly. The recipe may appear complicated, but if you've worked with dough beforeits actually not that hard to do. All it requires is a bit of know-how and some patience. In addition to rising time the dough benefits from resting while you are rolling it out into a large thin circle, which then needs to be handled gently in order to avoid tearing. Nevertheless, your efforts will be deliciously rewarded.

*Note: if you prefer, you can replace some or all of the Mozzarella with one or a combination of Fontina, Asiago and Provolone cheeses.

**Note: if you prefer, you can substitute your favorite pizza sauce in place of the crushed tomatoes, but omit the extra salt.

Prepare dough sponge and proof yeast by placing 1 1/2 cups warm water (105 - 115 degrees F.) in the bowl of a stand mixer, sprinkle with yeast and sugar, mix until yeast is fully dissolved. Add 1 cup of the 1 1/2 pounds bread flour, mix well and let stand for about 20 minutes or until mixture is foamy. (If not foamy, throw out and start over with fresher yeast.)

Place bowl on stand mixer fitted with dough hook. Mix on low adding olive oil and salt, gradually bring in the remaining bread four until most of the flour has mixed with the wet ingredients. Increase speed and knead until dough forms a cohesive ball and is smooth and silky, about 10 minutes. Transfer dough to a large bowl and cover tightly with plastic wrap. Allow dough to double in bulk, about two hours, punch it down and briefly knead it again to collapse all of the air bubbles. Remove 1/3 of the dough and set aside. Place the remaining dough in bowl and cover.

While the dough is rising, prepare the sauce by draining all the liquid from the canned tomatoes and crushing them with your hands. Transfer crushed tomatoes to a small bowl and add the olive oil, oregano, basil, salt and garlic. Mix well and set aside until needed. Not necessary, but if desired, the sauce can be cooked. Heat oil in a large sauce pan over medium-high heat. Add garlic and saute about 1 minutes, until fragrant. Stir in crushed tomatoes, oregano, basil, salt and simmer until thick, about 30 minutes.

Prepare the filling by heating the olive oil in a large skillet and adding the onion, mushrooms and a generous pinch of salt. Cook over medium-high heat, stirring frequently, until the the onions have taken on a light brown color, about 6 minutes. Add the garlic and chile pepper and cook, stirring, for about 1 minute. Add the spinach in handfuls, allowing each addition to wilt before adding the next. Once all the spinach has wilted cook for approximately 3 more minutes, or just long enough for excess liquid to evaporate. The mixture can be moist but shouldnt be watery. Season with pepper and additional salt to taste. Remove from heat. Drain the spinach mixture in a colander and set aside until needed.

If you have a baking stone, place it in the oven. Preheat oven to 500 degrees F.

When the dough has doubled in bulk, punch it down and knead it briefly (about 1 minute). Remove 1/3 of the dough and place it back in the bowl, covering tightly. Roll the large portion of dough out on a lightly floured surface until it is about 10- to 12-inches in diameter. Cover it with a clean towel and let it rest a few minutes while you lightly grease a 15- by 2-inch round deep-dish pizza pan, springform pan or cheesecake pan with olive oil. Remove the towel and roll out the dough into an even larger circle measuring 18- to 20-inches in diameterenough to cover the base and sides of the pan. Cover again and let rest for a few minutes, then gently lift it up, balancing the weight of the dough over your hands and forearms, and lay it over the pan so that the center droops down to cover the bottom.Gently press the dough into the corners and up the sides of the pan. Trim off any dough which hangs over the edge of the pan.

Roll out the second piece of dough on a lightly floured surface until it is about the same size as the pan, cover and let rest a few minutes. Lay the second piece of dough over the spinach filling, then turn down the edges of the first piece of dough off the sides and crimp the two edges of dough together with your fingers to form a thick raised border. Cut a couple of slits in the top layer of dough to let the steam escape during cooking. Brush the top of the crust with a little olive oil, then let the pizza rise an additional 15 minutes in the pan before baking. Bake at 500 degrees F. for 15 minutes, then lower the temperature to 400 degrees F. and bake for 20 to 25 minutes. If desired, spread about 1/2 cup of the sauce evenly over top crust and sprinkle with 1/4 cup Parmesan cheese during the last 10 minutes of baking time. Let stand 10-15 minutes before cutting. Serve hot or warm and enjoy!

Traditionally, the sauce and some Parmesan are placed on the top shell during the last few minutes of cooking which allows the top crust to brown before the toppings are added. I sometimes follow this tradition, but I also like to, nontraditionally, skip the topping and insteadadd a couple light layers of sauce and Parmesan to the stuffing mixture.

Cooking the pizza on a baking stone in the oven definitely helps in developing a great crispy crust. 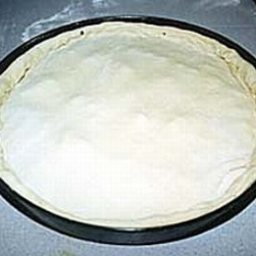 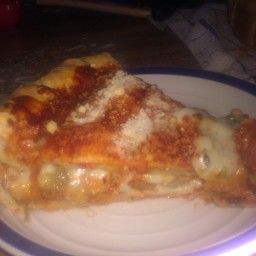 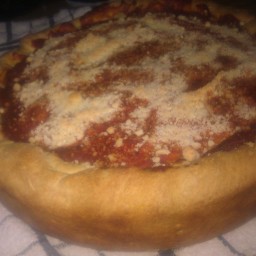 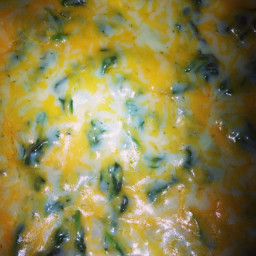 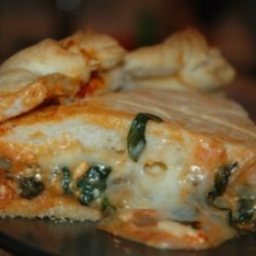 Gutzj01
This is a very good pizza and my first time I have made something like this. I changed a couple of things - I used 1 pound of spinach (instead of 2) and fried up 1/2 pound of hot Italian ground turkey. The dough I mixed per instructions but stopped when the dough was at a non-sticky consistency which ended up being a total of 4 cups. Everything else I did by the book (including preheating the pizza stone at 500 degrees. I used the extra tomato sauce as a dipping sauce for everyone (most people just poured it on top of the pizza). Everyone loved it. This takes a little time to prepare but it's worth the effort. Delicious! Thanks for sharing!!
6y
Reply
Reply

ellistucker
This was one of the best pizzas I've ever made! I used the optional sauce and Parmesan over the top crust and the pizza was absolutely delicious! It took a bit more work than I'm used to but it was more than worth it.
10y
Reply
Reply

TheSingingBaker
We liked this pizza. My husband said I could make this any time I want.
12y
Reply
Reply

sgrishka
Traditionally, the sauce and some Parmesan are placed on the top shell during the last few minutes of cooking which allows the top crust to brown before the toppings are added. I sometimes follow this tradition, but I also like to, nontraditionally, skip the topping and instead--add a couple light layers of sauce and Parmesan to the stuffing mixture. Cooking the pizza on a baking stone in the oven definitely helps in developing a great crispy crust. [I posted this recipe.]
14y
Reply
Reply