The culmination of a long quest for the ultimate Tiramisu recipe. The Kahlua and Amaretto give it the little extra kick. It is important to cool the Tiramisu for at least six hours or it will lose its shape. I store it in the freezer and let it thaw a bit before serving.

Beat together yolks and sugar in a large bowl with an electric mixer at medium speed until thick and pale, about 2 minutes. Beat in mascarpone until just combined.

Beat in 2 tbsp of Kahlua.

Beat whites with a pinch of salt in another bowl with cleaned beaters until they just hold stiff peaks.

Beat cream in another bowl with cleaned beaters until it just holds soft peaks.

Fold cream into mascarpone mixture gently but thoroughly, then fold in whites.

Stir together coffee, 2 tbsp of Kahlua and 2 tbsp of Amaretto in a shallow bowl. Dip 1 ladyfinger in coffee mixture, soaking it about 4 seconds on each side, and transfer to an 8x8-inch glass baking dish (2-quart capacity). Repeat with more ladyfingers and arrange in bottom of dish, trimming as needed to fit snugly. (9-12 ladyfingers).

Spread half of mascarpone mixture evenly over ladyfingers. Sprinkle with grated Hershey''s chocolate.

Make another layer in same manner with remaining ladyfingers and mascarpone mixture.

Tiramisu can be chilled up to 1 day. 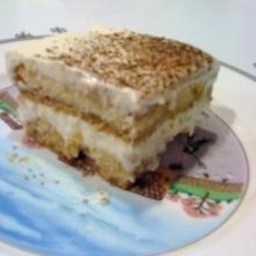 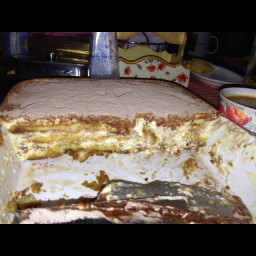 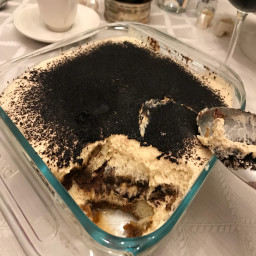 chefinator22
Amazing!! best dessert i have ever had, everyone loved it!
10y
Reply
Reply