A great barbecued brisket that's actually fairly easy to make and a real crowd pleaser. You can use a whole brisket, but the first cut is more manageable. They usually weigh about 10 pounds. That's about 8 or 9 pounds of meat after the fat is trimmed away, but you won't be doing that until you're done cooking. All that fat is going to be basting your brisket. It takes about 3/4 pound of meat to feed a hungry adult, so the recipe serves about 10 to 12 people. Any leftovers keep well in the refrigerator for up to 4 days. Leave leftover brisket unsliced, and reheat the foil-wrapped meat in a 300 degree F oven until warm.

To prepare Dry Rub: In an airtight container with a lid, combine the salt, pepper, paprika, and garlic powder. Shake to mix well. Sprinkle over the entire surface of the meat, concentrating on the fat layer. Rub or press into the fat and meat. Makes 1/2 cup.

To prepare Wet Mop: In a medium saucepan, combine the salt, dry mustard, chili powder, paprika and vegetable oil. Stir to make a paste. Add the remaining ingredients slowly, stirring all the while. Place over medium heat and bring to a boil. Remove from the heat and allow to cool. Pour into a container with a tight-fitting lid and refrigerate until ready to use. Brush the mop on beef or ribs while barbecuing over dry (no water pan), indirect heat. Makes 1 quart.

To prepare Barbecue Sauce: Combine the ketchup, Worcestershire sauce, lemon juice, brown sugar, mustard, water and garlic in a medium saucepan. Place over very low heat and simmer, stirring occasionally, 1 hour. For really smoky flavor, place on the grill away from the heat source during the last hour of smoking. Stir in the butter or drippings and cook 15 minutes longer. Pour into a container with a tight-fitting lid and refrigerate to store, up to 2 weeks. Makes about 3 cups.

* Note: To obtain pan drippings, place a drip pan under the brisket during cooking or save the juices that collect while the meat rests during slicing. You can also heat some of the fat trimmings to obtain some fat drippings. If using the grill/oven technique of barbecuing brisket, as described with the accompanying recipe, the meat drippings collect in the foil and can easily be spooned up and added to the sauce.

To prepare Beef Brisket using Slow Technique: Generously coat all sides of the brisket, particularly the fat layer, with the dry rub or salt and pepper. Cover and let the meat come to room temperature, about 1 hour. Meanwhile, prepare a fire by lighting wood or a combination of wood and charcoal in the firebox of a cooker or at the end of a barrel smoker opposite the end with the vent or chimney. Or light the coals in a water smoker. Or preheat a gas smoker/grill. When the fire has burned down to glowing embers or the coals are covered with gray ash, place the brisket on the grate but not directly over the coals. Or place a full pan of water over the coals or hot lava rocks, then add the grate and brisket. The fire should be low, 225 to 250 degrees F. Cover the cooker and smoke the brisket, turning every hour or so, until it is tender and the internal temperature reaches 180 to 190 degrees F on an instant-read thermometer, 8 to 10 hours. Tend the fire by adding wood (or wood embers from a separate fire) or coals to keep it from going out and to keep the temperature inside the cooker between 225 and 300 degrees F. If using a mop (basting is advisable only when cooking without a water pan), brush it on when turning the brisket or after tending the fire. When the brisket is charred and tender (a fork should insert easily), remove it from the cooker and allow to rest about 20 minutes. Trim off the fat layer (that's been basting the meat) and cut brisket in thin slices across the grain. Serve with warm barbecue sauce, if desired. Or, stack several slices in a sandwich bun spread lightly with sauce. Add more sauce, as desired.

To prepare Beef Brisket using combination Grill/Oven Technique: The following technique produces smoky, tender brisket and cuts the time almost in half. Generously coat all sides of the brisket, particularly the fat layer, with the dry rub or salt and pepper. Cover and let the meat come to room temperature, about 1 hour. Light a fire in a charcoal grill that is big enough to hold the brisket. Allow the coals to burn until covered with gray ash. Place the brisket on the grill, fat side down. Grill the brisket about 45 minutes or until the fat is charred, turning when necessary to stop fat from dripping into the fire. Squirt flare-ups with water to douse the flames. For a gas grill; grill directly over a medium flame for about 20 minutes or until the fat side was charred, then over indirect heat for another 20 minutes. Remove the brisket from the grill.

Preheat the oven to 250 degrees F. Place the brisket on a double thickness of aluminum foil in a shallow roasting pan. Wrap it tightly and bake for 4 to 5 hours or until the meat is very tender. Remove the brisket from the oven and peel back the foil. Increase the oven temperature to 350 degrees F. Return the brisket to the oven and roast, uncovered, for 30 minutes to crisp the top layer of fat. Allow the meat to rest for 20 minutes. Trim off the fat layer and cut across the grain into thin slices. Serve with warm barbecue sauce, if desired. Or, stack several slices in a sandwich bun spread lightly with sauce. Add more sauce, as desired.

My favorite way of eating this is a big brisket sandwich, slathered in BBQ sauce with a big dollop of extra-creamy coleslaw in the sandwich. That's what I call, good eating! 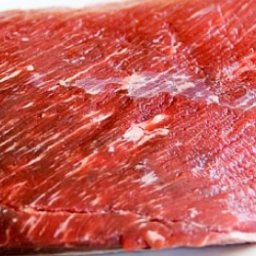 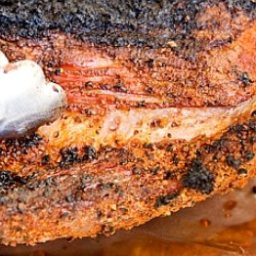 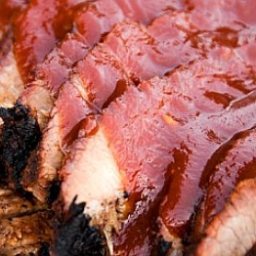 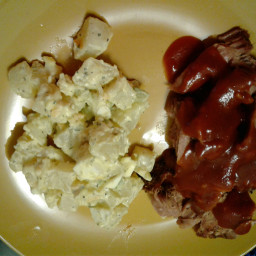 kittenpantses
Not a brisket person but your recipe is so detailed and describes so many different techniques, you deserve 5 stars!
6y
Reply
Reply

Gutzj01
Very good! We did the oven/grill option and it was wonderful. Used mesquite charcoal for the grilling and mmmm did that brisket have some serious smoke flavor. The only thing I would do different would be to double the BBQ sauce portion. It was so good I wish I had extra to slop on. Very good recipe!
8y
Reply
Reply

leekl
But is it really 1333 calories per serving? I guess I'm kinda of confused as to where they get some of their caloric values in the recipes.
8y
Reply
Reply

larryv08
It was awesome and was ate before the picture could be taken! Thanks for the recipe!
8y
Reply
Reply