Chicken Stock in a Crockpot

I have a cold. Everyone I know has a cold. What to do, what to do...Here we go! NOTHING, and I mean NOTHING is as good for you as homemade stock from bones. For as long ago as ancient Egypt and the 10th Century doctors recommended it as a curative. Even today, doctors say that the marrow & minerals have a particular blend of nutrients and vitamins that can slow the activity of certain white blood cells. This may have an anti-inflammatory effect that can lead to temporary ease from symptoms of ilnesses like the common cold!

Now try making it in your crockpot and avoid the copious amounts of skimming & stirring!

This recipe comes out of years of intensive research of both old and contemporary, internet hunting, loving family advice, and personal experience. To be honest, my original recipe I have in my archives doesn't have any ingredient amounts, or set times. Mostly because it's intended as a guideline, a path to follow on your own cooking journey. Play with it! Add something you like or have in your garden if you have one; dunk in some bell or chili peppers! Anything goes! =)

First off, let's talk about offal (pronounced 'awful'). This is generally the inedible parts left over from an animal after butchering (ie. livers, kidneys, etc). Feet are also included in this mess, and while unlike the aforementioned liver & kidneys , which can be eaten alone quite handily, feet are a natural flavor enhancer as well as the healthiest part of a good stock.

Why? Because they are filled with connective tissues made of collagen and tiny bones filled with gelatin. These two ingredients give stock a quality of richness and body. Stock made from chicken feet is fabulous, and incredibly good for you with all that gelatin. However, if you are using raw feet, necks, and backs please clean them very well under cold water, especially the feets!

Cut all of the meat off of the bones. Trim away excessive fat, but not all of it; fat is where flavor resides after all...and remove excessive hunks of skin, because it doesn?t really add much to the stock but excess fat. Place the chicken carcass and any stray bones into your crockpot. For a larger chicken (6 lbs) use a 6 quart crock, for a smaller chicken (4 lbs use a 4 1/2 quart crockpot.

Add any vegetables you?d like, really, celery, carrots, onions, leeks, garlic, parsnips, and the herbs are just my personal liking. I even throw in a teaspoon of dried juniper berries! During the Holidays, I tend keep a bag in the freezer of the scraps left from the chopped stuffing vegetables, which is all of the veggies above except for the leeks. Then I just include this bag with the bones when I begin the stock. Don't worry about peeling them (just scrub them up well in cold water), or chopping them any more than you need to fit them into the pot, you're just going to toss them out as a mushy mess later =P As the leeks, they need some additional TLC. Just get a bowl of cold water, cut them lengthwise in half, and cut them crosswise in half, and then separate out all of the layers of their flesh and soak them, swishing them around to get all of the dirt and grit out. You'll want to switch out the water about 3 times for the swishing.

*Onion note: You're probably wondering why I say to leave the skins on. Color, friends! Cut off the root ends. but leave the skins on, for they impart that golden delicious color that the stock will have. The fat of a chicken will color the stock gold, but yellow onion skins are a traditional addition to make the stock even more pretty. It does no harm, I promise!

Cover the bones and vegetables with the wine (if desired) cold filtered water. I will stress COLD, for Two big reasons: ONE, it's more efficient to dissolve the gelatin in bones gradually with cold water slowly brought to a simmer. This extracts the full amount of the gelatin, whereas starting with hot tap water does not. Two, it results in a clearer stock, because heating the bones and flesh up gradually results in less of a release of fats, blood and other impurities into the liquid.

Add 1-2 tablespoons of vinegar (I usually use apple cider) and allow to sit for about an hour. You really need to do this to allow the minerals to be extracted from the bones. If you're allergic to vinegar, you can use lemon juice.

Turn the slow cooker to low and allow to simmer overnight. I usually let it go for a full 24 hours. Traditionally, if you were making this on the stove, you'd be in for hours or watching for a nasty scum to rise up and need to be scooped out. This doesn't happen in a crockpot! So read a book, watch tv, go to bed, you're done for now! Just note: Most crockpots, even if they feature a manual setting WILL turn themselves off after 12-14 hours; it's a safety feature. Just be ready to reset it and let it chug along ^_^

Once it has cooled a bit, strain chicken stock using a colander, sieve or cheesecloth (A combination of a cheesecloth-lined colander works best) into a pot that will eaily fit into your fridge. Ladle out the stock from the cooking pot into the holding pot. Do not try to pour from one to the other; you're likely to make a mess that way! When you get towards the bottom and hit your veggie-boney mush, use tongs to lift it all out and pick over the bones for some yummy meat to use in Chicken Noodle Soup (I'll post this eventually), chicken pot pie, etc.

Cover the strained stock with a lid, chill it down in a sink of ice water and then put it in the fridge, and allow it to cool and congeal overnight. In the morning, there might be a layer of fat atop. Skim off as much as you like, but not all of it! Also, sometimes the stock will not congeal very much, if at all. This is normal so don't panic! The slow cooking process doesn't allow for much reduction is all, so that scum I was talking about before? Never gets a chance to appear.

Store in plastic containers, label them with quantities, and use in soups, stews, sauces and more!

If you want to freeze some, don't forget to allow for some headroom, as liquids expand when they freeze. Freeze in 1 quart containers, also you can freeze them into ice cube trays for 2 tablespoon increments, then simply pop them out for those saute/stirfries that call for only a little stock. 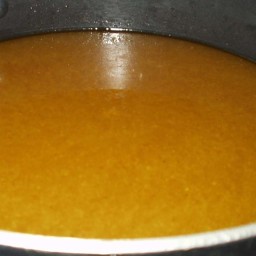 After straining, in the holding pot! 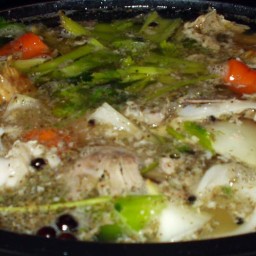 Soaking it all in before the long simmer.