Recipe from the Food Network!

Marinade for the shrimp-

Grate the cloves into a bowl. Then zest a lemon and squeeze juice into the bowl. Add the red pepper flakes, olive oil, salt, pepper, and a cup of water.

Butterfly the shrimp by slicing its backside open so the marinade can seep in when we add the shrimp. Drop the raw shrimp into the marinade bowl while you start your pasta.

Salt the water until it tastes like a salty ocean in your pot and boil. When boiling, add in the linguine until cooked.

Back to the marinade while pasta is cooking-

Place shrimp in a sizzling pan (without the marinade) and cook till pink, take the shrimp out on a plate, and pour marinade in pan and add a cup of linguine water and let simmer add lemon juice from your 2nd lemon and butter, add shrimp back in pan, taste and season with salt and pepper as needed, put cooked linguine in pan with shrimp and marinade and toss until mixed.

A great bonus side-

Buy big stalks of broccoli, cut off stem and pull apart, sprinkle olive oil on top, bake at 425 at ten minutes, then flip it over and add parmesan cheese and back in oven for 5 minutes. 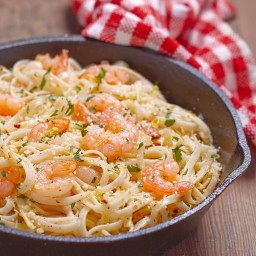 Keishjohnso8
I did not like this recipe at all. The flavor is not good and it comes out soupy
3y
Reply
Reply