Try this Vegetable and Cheese Strata recipe, or contribute your own.

In a large skillet cook the onion, the scallion, and the mushrooms in the oil over moderately low heat stirring, until the onion is softened, add the bell peppers and salt and pepper to taste, and cook the mixture over moderate heat, stirring, for 10 to 15 minutes, or until all the liquid the mushrooms give off is evaporated and the peppers are tender. Arrange half the bread cubes in a buttered large shallow 4 1/2 quart baking dish, spread half the vegetable mixture over them, and sprinkle half the Cheddar and half the Parmesan over the vegetables. Arrange the remaining bread cubes over the cheeses, top them with the remaining vegetables, and sprinkle the remaining cheese over the top. In a bowl whisk together the eggs, the milk, the the mustard, the Tabasco, and salt and pepper to taste, pour the egg mixture evenly over the strata, and chill thestrata, covered, overnight. Let the strata stand at room temperature for 15 minutes and bake it in the middle of a preheated 350F ! oven for 50 minutes to 1 hour, or until it is puffed and golden and cook through. Recipe By : Barbara Taub/tpogue@idsonline.com Posted to MC-Recipe Digest V1 #237 Date: Tue, 8 Oct 1996 22:34:56 -465800 From: Terry Pogue 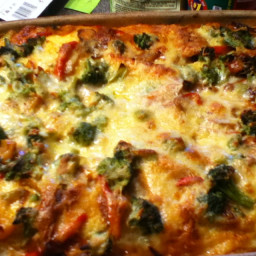