This recipe is very simple. My original version used McCormick's Fajita Marinade mix, but this has been discontiued. Serve with Mexican rice, Mexicorn, Ranch Beans with jalapenos, and guacamole.

Rinse chicken, and place in a ziplock bag. Put steak in separate ziplock bag. In a bowl, mix marinade and spices. Divide the marinade between the two bags and squeeze out all the air. Let marinate in fridge for at least 1 hour and up to 12 hours. Grill chicken to well done, basting with leftover marinade. Grill steak until medium rare, also basting. Meanwhile, in a large skillet, saute the onions and peppers, seasoned with salt, in the oil for about 10 minutes on medium high heat. Slice meat against the grain into strips. Microwave the tortillas for 15 seconds, and spread sour cream on. Put a few pieces of the meat, some onion and pepper, and taco sauce on the tortilla Roll up and enjoy! 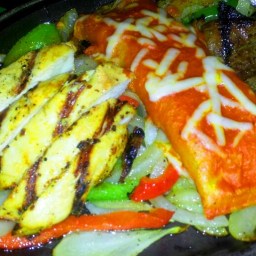 dont forget to add an enchilada to the dish