Stuffed green peppers made with and Italian taste.

Fill a stockpot with water and bring to a boil.

Slice the tops off of the peppers, scoop out seeds. Cut peppers in half. Remove white membrane and discard. Put peppers in boiling water and cook for 10 minutes. Using tongs, remove peppers from water. Drain on clean kitchen towel.

Saute onion and sausage in a nonstick skillet over medium heat until onion is translucent and sausage is browned. Add garlic and cook for a few minutes. Drain on a paper towel lined plate. In the same skillet, bring broth to a boil, add rice, cover. Turn off heat. After 5 minutes, stir rice. Turn heat on medium, add sausage, onions, and garlic to rice. Pour in can of tomatoes, stir. Cook until all the liquid has been absorbed.

Place the peppers cut side up in casserole dish. Fill with rice mixture. Top with a slice of cheese.

Bake at 400 degrees for 20 minutes. Increase oven temperature to 450 degrees and bake for 10-15 minutes or until cheese is melted and turns a spotty brown. Remove from oven and cool for 10 minutes before serving. 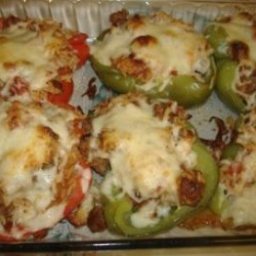 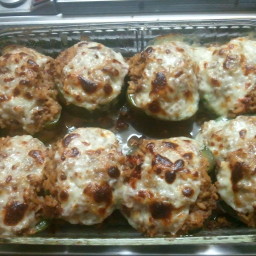 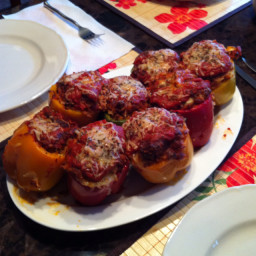 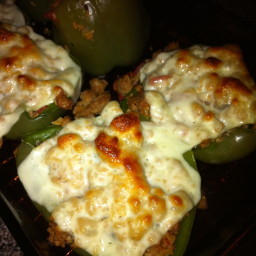 I used sliced cheese for the tops that is why it is square but delicious anyway. 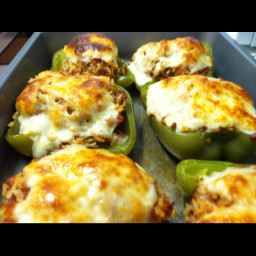 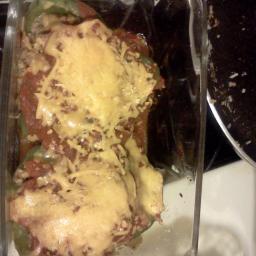 "Like a little spice in your life? Try these! Stuff peppers (or poblano chilis!) with savory seasoned chicken, cheese, and a yummy cornbread stuffing for a treat that won't quit!" —  Firebyrd

HappyInWA
My family loves this recipe and even I, who am not so hot on peppers (pardon the pun), like them.
7y
Reply
Reply

Mwbs2010
Very good recipe! Only boiled peppers for about 7 mins, and added some V-8 juice to the mixture. Turned out great!!
8y
Reply
Reply

Scruffy82
I love this recipe! I use Turkey Sweet Italian Sausage and add a little V-8 juice.
8y
Reply
Reply

Holly88
Made this tonight and everyone loved it. I actually got "thanked" by my kids. Although my 9 yr old didn't like the pepper itself, she ate all of the stuffing. My 4 yr old actually ate the pepper! Definitely a winner!
8y
Reply
Reply

jacobblade700
I add the cheese between layers of the rice mixture and only do 20 min at 375 (burns otherwise). Phenomenal!
9y
Reply
Reply

jacobblade700
Absolutely incredible! It takes a long time cooking, but it is worth every minute! Personal flair: I add a little cheese into the peppers as I fill them (between scoops), before chucking into the oven
9y
Reply
Reply