3. In the same pan you used to fry the shanks, add the onion and garlic and fry for 2-3 minutes.

5. Add the lamb shanks back to the pan and stir well, then add all of the remaining tagine ingredients- except a few of the flaked almonds for garnish.

6. Reduce the heat, cover the pan with a lid and cook in the oven for 2 hours, or until the lamb is tender.

7. Remove the lid and cook for a further 30 minutes, or until the tagine is slightly thickened.

8. For the tabbouleh, place the bulgur wheat into a pan with the chicken stock. Bring to the boil, then reduce the heat to a simmer. Cover the pan with a lid and cook for 15-20 minutes over a low heat. When the bulgur wheat is tender, drain off the excess stock.

9. Remove from the heat and allow to cool slightly, and then transfer the bulgur wheat to a bowl. Add the red onion, pistachios, lemon juice and zest, pomegranate, olive oil and herbs and mix well. Season to taste, with salt and freshly ground black pepper.

10. To serve divide the tabbouleh among four servings plates, and then spoon the lamb shank tagine alongside. Chop the coriander cress and sprinkle over the tagine along with the flaked almonds.

Ras-el-hanoutand and the harissa paste can be bought from the larger super market chains or you can make it yourself. I have add recipes for both. 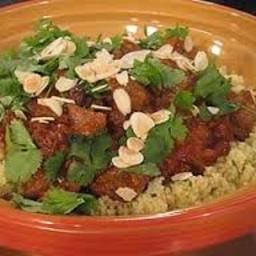