Try this Lentil and Quinoa Spinach Soup recipe, or contribute your own.

This soup is sweet from lentils, peas, tomatoes and carrots. So, instead of using tiny pasta, add slightly bitter Quinoa. We added all of the options. 12/97 Hearty soup for 6 with bread. STOCK: We need 5 cups of liquid to begin the soup. Drain the stewed tomatoes, collecting the liquid in a calibrated bowl. Set tomatoes aside to drain some more. To the bowl, add chicken broth, cup of bouillion (dissolved cube) and make up the difference with water. Put stock in a soup pot along with lentils, peas, oil, thyme, and pepper. Add whole, so that you can remove them latter, bay leaf, fennel frond, and piece of leafy celery. Bring to a boil. Reduce heat and simmer until lentils are tender (20 to 25 minutes). Quinoa may be made far in advance. Rinse it several times with a fine mesh sieve. Cook it by steaming the way we would rice but quinoa expands to 4 times its original measure (at least 4 parts water to each part grain). Make the quinoa (keen-wah) if needed. Meanwhile, finely chop (in food processor fitted with metal blade) the onion, carrot and garlic. Set aside. In a large skillet, set over medium heat, cook until slightly caramelized and aromatic, the drained tomatoes, garlic, carrot, and onion. Optional: add the contents of a turkey-lean Italian sausage link to the skillet and brown and crumble the meat. Remove the large vegetables and bay leaf from the soup. Add the contents of the skillet. Add up to 1 cup of water if needed. Simmer until mellow: 15 to 25 mins. Add the cooked quinoa and spinach. Adjust for salt, pepper, garlic. Add none or all of the options. Let simmer for about 5 minutes or until spinach is just wilted and serve in a wide bowl. 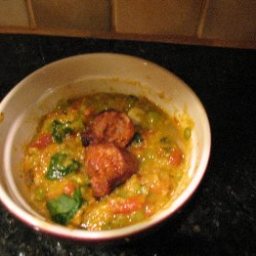 Tamito
I tweaked some of the ingredients to suit my taste and it turned out really good. I did not have spinach, but added ground lamb and mushrooms. The quinoa does not need to be prepared in advance, you could just add it to the soup while it still simmers.
12y
Reply
Reply